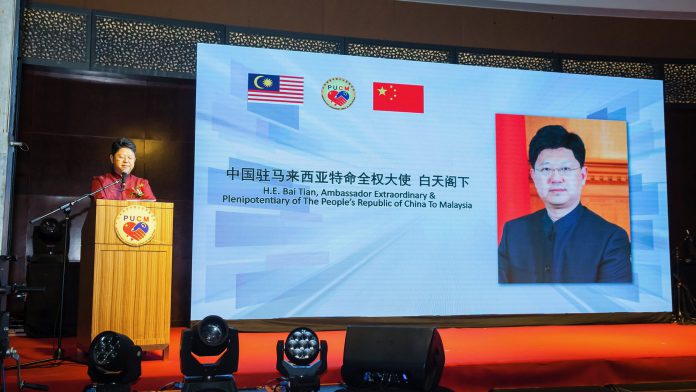 KUALA LUMPUR, July 29 (Bernama) — China is willing to enhance its bilateral trade connectivity with Malaysia and is open for more Malaysian products to compete in its market, says Chinese ambassador to Malaysia Bai Tian.

He said areas in which the two governments could further discuss on include finance and high-value agriculture.

“We can also tap into new industries and the new form of businesses such as e-commerce, artificial intelligence and hi-tech, building new ‘growth points’ for our bilateral cooperation,” he said in his remarks at the Belt and Road China-Malaysia Forum on People-to-People Exchange and Economic Cooperation here today.

Bai Tian noted that China was also open to deepening the people-to-people exchanges with Malaysia by building richer collaboration in areas such as think tanks and media dialogues, students exchange, human resource training, tourism and sports, as means to share experiences and learn from each other.

“Often referred to as the ‘Two Countries Twin Parks’, both of them are advancing steadily.

“The East Coast Rail Link just got relaunched, and it will prove to be a catalyst for the development in the states along the route in many areas such as trade, logistics, tourism and industrial parks,” he stated.

On tourism, Bai Tian said the BRI had brought the opportunity for both Chinese and Malaysian people to know each other better, and in the last three years, almost three million Chinese tourists had visited Malaysia.

“Next year, we will also celebrate the China-Malaysia Year of Tourism and Culture in conjunction with Visit Malaysia 2020.

“The Chinese Culture Center will open later this year, aims among others to ensure the bond of common interests between China and Malaysia, enhance the understanding and friendship between our peoples’, and give a fresh and strong impetus to the China-Malaysia relations in the new era,” he added.

Meanwhile, senior director strategic planning at the Ministry of International Trade and Industry John Patrick Antonysamy said this year marked the 45th anniversary of diplomatic ties between Malaysia and China.

“This will pave the way for more productive economic cooperation between our two countries.

“It does not stop there as other countries will also benefit from the enhanced land and sea connectivity, as well as infrastructure development that currently in-progress,” he said.

He noted that to remain relevant and competitive in today’s digital era, Malaysia must make sure that its human capital was well trained and ready to embrace and adapt to new technology and employment.

He also pointed out that as there were more than 120 countries along the BRI, there was huge potential to boost economic growth by exploring new markets in these countries.

“E-commerce can be the conduit to make this a success,” he added.

2 prison localities in Terengganu under EMCO

WHO commends China for submitting COVID-19 vaccines data for assessment

LKL to export US$19 mln nitrile examination gloves to China