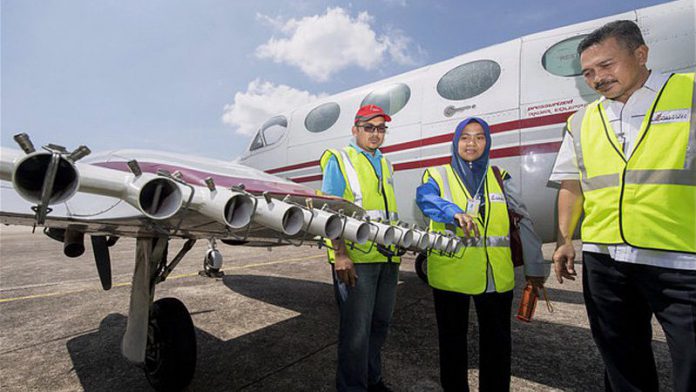 KUALA LUMPUR, Sept 16 — Cloud seeding was carried out in three states – Selangor, Negeri Sembilan and Melaka – today to reduce the haze, according to the Malaysian Meteorological Department (MetMalaysia).

Its director, Jailan Simon, said the operation, conducted with the cooperation of the National Disaster Management Agency (NADMA) and the Royal Malaysian Air Force (RMAF), resulted in rain in several areas in the states.

“The RMAF aircraft left the Subang Air Base at about 12.30 pm for the areas targeted for the cloud-seeding.

“Rain was reported in the Cheras, Bangsar, Petaling, Kuala Selangor, Hulu Langat, Klang and Gombak districts in Selangor, the Seremban, Tampin and Jelebu districts in Negeri Sembilan and the Alor Gajah and Jasin districts in Melaka,” he said in a statement.

Jailan said the aircraft, faced with air space clearance problems due to heavy air traffic, returned to the base at about 3 pm.

The air quality was at ‘very unhealthy’ levels early today in Putrajaya, Johan Setia in Klang, Selangor, and Sri Aman, Samarahan and Kuching in Sarawak.