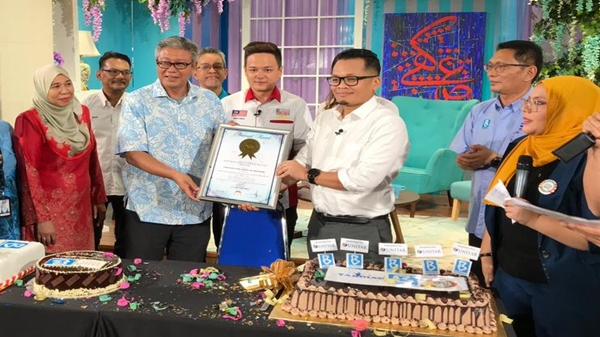 KUALA LUMPUR, Sept 17 — The success of the Malaysian National News Agency (Bernama) in getting a place in the Malaysia Book of Records (MBOR) today has boosted confidence in the national news agency to face challenges in the current media industry.

Bernama Editor-in-Chief Datuk Mokhtar Hussain said the team spirit demonstrated by Bernama staff in all platforms in achieving the first mission for the ‘Longest Non-Stop National Live Broadcast In Various Languages’ showed the strength possessed by the news agency to move forward especially when the landscape for the media industry was facing various challenges.

“We feel that if we truly sit down together we can see the way how we can improve especially in providing services to our clients and the general public,” he told Bernama after receiving the MBOR recognition certificate for the “Longest Non-Stop National Transmission In Various Languages”, here today.

The certificate presentation was witnessed by the Member of Parliament for Setiawangsa Nik Nazmi Nik Ahmad.

At exactly 9.31 am today, MBOR Business Development Director Jwan Heah confirmed Bernama’s success in getting its name in the MBOR after going on air non-stop for 25 hours from 7 am yesterday in conjunction with the Malaysia Day celebration.

The non-stop direct telecast until 9 am today provided useful information in conjunction with the Malaysia Day celebration by showing various interactive programmes and interviews in four languages via all the Bernama channels namely Bernama News Channel (BNC), Bernama Radio, Bernama.com as well as all social media platforms of the news agency.

Mokhtar also expressed his pride as well as his gratitude to all Bernama staff involved with the programme on their achievement.

“Congratulations to the Bernama staff who had worked hard to make preparations for the past several days, in fact, I too had the opportunity to see them in the control room, (they) were very committed, and I was impressed by the spirit shown by them,” he said.

Meanwhile, as the man who created the idea to carry out the initiative, Bernama Radio Chief Operations Officer Azlan Idris said it was achieved as the role of Bernama, which was established more than 50 years ago, as a news agency was outstanding.

The programme also proved that Bernama was a strong news agency which boosted the confidence of the stake holders particularly the corporate sectors to cooperate.

“I feel the need to say what Bernama should do after achieving the age of 50 years. We want to create a new name which would not only give an impact to the Bernama staff but also its partners and the corporate sponsors.

“This is the best platform to showcase our products and services, our efforts to create this record received positive reaction…although this effort was done in less than two months,” he said.

Meanwhile, Jwan Heah said Bernama was eligible to get the recognition for going on air for 25 hours non-stop in four languages compared to the previous record where the transmission was in one language.

“We (MBOR) are already 25 years, out of the 7,230 records only two organisations from the broadcasting field had participated in MBOR. The first one was only in one language, so Bernama in promoting the spirit of solidarity in four languages certainly is the first in our record,” he said.

Meanwhile, he proposed that in future, any media could create a record for going on air live in more than four languages as Malaysia had numerous ethnic groups including in Sabah and Sarawak or going on air for 48 or 72 hours.