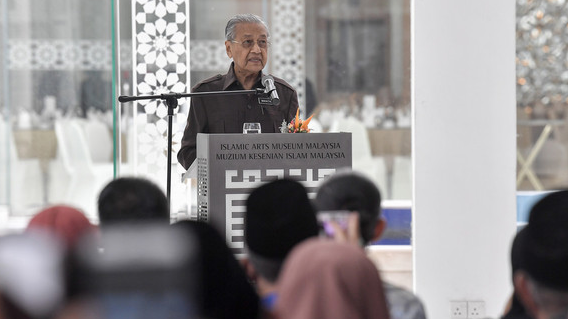 KUALA LUMPUR, Sept 20 — Khazanah Nasional Bhd will sell assets that are “not useful to us” to raise funds to pay off the country’s debts, said Prime Minister Tun Dr Mahathir Mohamad.

However, no decision had been made yet for Khazanah to dispose of its entire assets, he said.

“No, they are just studying whether they should (sell) or should not, but no decision has been made,” he told reporters after launching the Heritage and National Culture Charter here today.

He said those assets that were not worth keeping would be sold in order to raise funds to pay debts left by the previous government.

“Remember that the previous government borrowed more than U$1 trillion that is a burden to us. They borrowed and the money was not invested. It’s hidden.

“If the money were invested, we (would be able to) go back to the related companies and get back the money, but we don’t know where the money is,” he explained.

The prime minister said Khazanah was originally set up to purchase shares which were allocated to the Bumiputeras but it had gone beyond that.

“That is not the original mandate for Khazanah but now we are trying to go back to the original objective,” he added.

Dr Mahathir said at the moment the government had to pay debts left by former prime minister Datuk Seri Najib Tun Razak from taxes or by selling assets.

“That is the burden left by Najib and now of course he talks a lot. But, all these things were carried out, including buying the ships from China. It’s not our decision. It’s stupid, but, he is referring to himself, because he was the one who bought it, not me,” he added.

It was reported that Najib had earlier criticised the Pakatan Harapan government on its decision on the recent disposal of assets by Khazanah, including selling the Prince Court Medical Centre.

No treason, just a request, says Anwar on letter to King