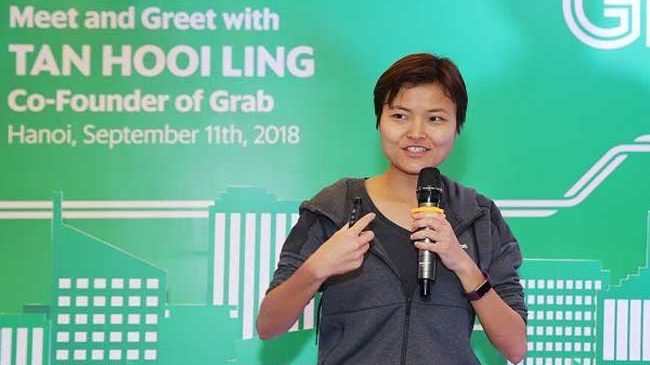 As COO, the 35-year-old Malaysian focuses on growing Grab’s market share in the eight countries and 336 cities where the company operates.

Tan, together with co-founder, Anthony Tan, have successfully raised over US$9bil since the app was launched in 2012.

The list, Forbes Asia said, recognises women who are breaking down barriers and playing a significant role in shaping Asia’s business landscape.

This includes entrepreneurs who have started their own business, those transforming their family enterprises and high-level executives, it said in a statement.

“By profiling the outstanding women, Forbes Asia aims to highlight their achievement in the business world and present them as both powerful and empowering so that their success may inspire all our readers, ” Rana Wehbe, editor of the list said.

Others who made it to the list this year include Nguyen Thi Phuong Thao, the founder and CEO of Vietjet Aviation.

Thao made history as the only woman in the traditionally male-dominated aviation business to start and run her own major commercial airline in 2007.

Vietjet presently has a market value of US$3bil, with its shares having more than doubled since its 2017 IPO.

Thao is also Vietnam’s first self-made woman billionaire and South-East Asia’s wealthiest woman, with a net worth of US$2.5bil.

Another businesswoman featured on the list is Falguni Nayar who quit her job and launched beauty retailer Nykaa in 2012, after nearly two decades as an investment banker.

The company now has 46 stores across India and attracts 45 million visitors a month to its website and app.

Forbes Asia said Nykaa has raised US$51mil in funding and was valued at US$724mil after TPG Growth invested US$14.4mil for an undisclosed stake.

Over in Japan, Akiko Naka is the founder and CEO of Wantedly, a social-networking service for professionals.

Since listing on the Tokyo Stock Exchange’s Mothers market for startups in late 2017, Wantedly’s share price has tripled, giving the company a market value of 29 billion yen (RM1.125bil).

The company has also gathered about two million users.

Venture capitalist Jenny Lee, who was one of the highest-ranking women on the Forbes 2019 Midas List, also secured a spot on the 2019 Asia’s Power Businesswomen list.
– the star –