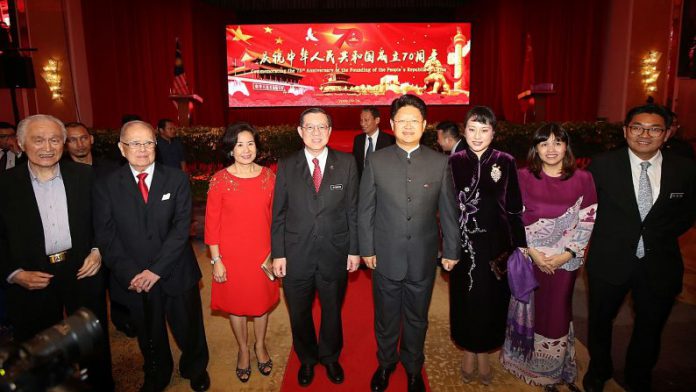 KUALA LUMPUR, Sept. 24 — The Chinese embassy in Malaysia hosted a special reception in Kuala Lumpur on Tuesday evening to mark the 70th anniversary of the founding of the People’s Republic of China, which falls on Oct. 1.

The event, held at the Shangri-La Hotel was attended by Malaysian Finance Minister Lim Guan Eng as the guest of honor, Members of Parliament, diplomats, representatives from different organizations, and representatives of Chinese companies and students in Malaysia.

Addressing the function, Chinese Ambassador to Malaysia Bai Tian highlighted the enormous strides forward that country had made under the leadership of the Communist Party of China, which has guaranteed stability and national direction.

“It has been leading the Chinese people on a path suitable to China’s national conditions, and representing the interests of the Chinese people through its policies and strategies. This is the fundamental reason why the Chinese Communist Party is able to win public support, stay in power and work miracles.

“China has gone through magnificent changes. The Chinese nation has stood up, grown rich, and become strong. Next year the Chinese people will build China into a well-off society, meaning the total elimination of poverty in China, and that 1.4 billion people will be living better-off lives. It would be nothing less than a miracle in the history of mankind,” he said. – Xinhua News –