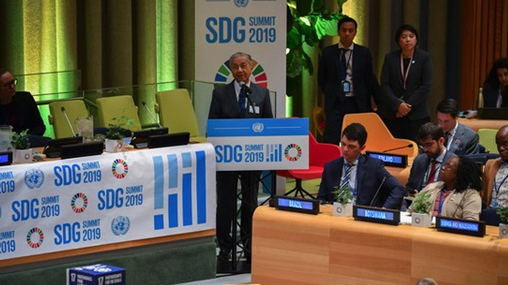 NEW YORK, Sept 27 — Tun Dr Mahathir Mohamad said Malaysia takes its commitment to conservation seriously and is proud to be a signatory to an extensive list of global treaties on conservation, wildlife, forestry and the environment.

He pointed out that Malaysia also had kept to it environmental promises, including the one made at the Rio Earth Summit in 1992 where it committed to maintaining at least 50 per cent of its land mass under forest cover.

“Today, almost three decades later, I am proud to announce that we have not reneged on that pledge. Malaysia’s forest cover is currently at 55.3 per cent or 18.3 million hectares of our total land area, exceeding Malaysia’s initial commitment at the Rio Earth Summit.

“This represents the nation’s will and commitment to conserve and sustainably manage our forest, its flora and fauna,” he said at Thursday’s ‘Environmental Stewardship in Addressing Poverty to Achieve Sustainable Development for All’, a side event of the United Nations General Assembly here.

He nonetheless noted that although Malaysia had put in place various efforts to prevent environmental loss, it still faced challenges from its growing socio-economic development needs.

“The increasing population of Malaysia brings with it an increased demand for food, water and other infrastructure which places pressure on our natural resources and environment,” he said.

Dr Mahathir also highlighted Malaysia’s Eleventh Malaysia Plan (2016-2020) where substantial resources had been allocated to implement a wide range of actions to address climate change as well as to further enhance conservation and restoration efforts.

Malaysia was the main organiser of the event with support from Pakistan, Turkey and the United Nations Department of Economic and Social Affairs.