BAKU (Azerbaijan), Oct 26 — Malaysia and Azerbaijan have agreed to strengthen their bilateral ties, especially in the energy and tourism sectors.

The understanding was reached when Prime Minister Tun Dr Mahathir Mohamad made a courtesy call on Azerbaijan President Ilham Aliyev at the Presidential Palace here today.

In the 20-minute meeting, which was held on the sidelines of the 18th Non-Aligned Movement (NAM) Summit, Ilham said both countries have good cooperation in the energy sector and he hoped it could be expanded to other fields as well, particularly tourism.

Ilham, whose country has assumed the chairmanship of NAM for the next three years, also praised Dr Mahathir for his speech at the plenary session of NAM yesterday.

“Your speech yesterday was great. It is a forward looking vision, open approach on important issues and you always defend justice,” the president said.

Ilham said the 94-year-old premier was behind Malaysia’s miracle transformation and Azerbaijan hoped to share his experiences.

Dr Mahathir, who chaired NAM when Malaysia became its chairman in 2003, said he hoped Azerbaijan would be able to carry out its NAM task well and keep it united and relevant in the post-Cold War era.

He said Malaysia has always maintained its policy of being friendly to every country.

On bilateral ties with Azerbaijan, Dr Mahathir said Malaysia hoped to expand its cooperation in the trade and tourism sectors.

“Not many Malaysians know about Azerbaijan, although some know Baku due to its historical sites. There are some Malaysians staying here, and of course we have Petronas here,” he said.

After both countries established diplomatic relations on April 5, 1993, Azerbaijan opened its embassy in Kuala Lumpur in June 2007, while Malaysia’s embassy in Baku was opened on April 1, 2014.

Following the establishment of the embassy, Petronas Azerbaijan started its operation in Baku in 2015 and to date its investment is estimated at US$5 billion in the country. 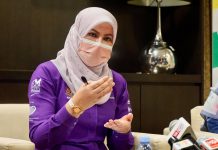 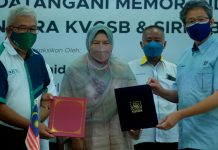 Locals not keen to work in plantations despite lucrative income – Zuraida

Govt to revise down COVID-19 self test kit price by end...