KUALA LUMPUR, Dec 21 — The Kuala Lumpur Summit (KL Summit) 2019 concluded on a high note with tangible initiatives being laid out to uplift the Muslim ummah and address some of the concerns of the community such as Islamophobia.

Despite criticism, Prime Minister and summit chairman Tun Dr Mahathir Mohamad forged ahead in convening the Dec 18-21 conference, firm in his belief that it would be able to make positive contributions to the beleaguered global Muslim community.

“We would like to again reiterate that this summit is focused on its objectives of finding solutions and programmes that we believe can assist and eventually save the ummah from their current plight,” he said at the closing session of the conference at the Kuala Lumpur Convention Centre (KLCC) here today.

Today the ummah is faced with oppression, the incarceration of millions, are placed in detention camps, civil wars resulting in total destruction of cities and nations leading to mass migration of Muslims to non-Muslim countries, the rise of Islamophobia and irrational practices that go against the tenets of Islam yet proclaimed in the name of Islam.

Like-minded leaders showed their support with the summit having been attended by the Emir of Qatar Sheikh Tamim bin Hamad Al Thani, Turkish President Recep Tayyip Erdogan and President Hassan Rouhani of Iran, as well as delegates at all levels from 56 Islamic nations.

Far from being a mere talkfest, the summit crafted initiatives that will benefit the ummah in fields such as advanced hi-technology, media collaboration, centre of excellence for scientific research, food security as well as youth leadership.

Dr Mahathir took pains to explain that the KL Summit was not intended to take over the role of the Organisation of Islamic Cooperation (OIC) but one that serves as a strategic collaboration to complement efforts pursued by existing coalitions of Islamic nations, such as the OIC and D-8 Organisation for Economic Cooperation.

Meanwhile, delegates attending the just-concluded KL Summit have given the thumbs up for the gathering which they feel has succeeded in producing tangible results, not a mere talk shop.

Prof Dr Umaimah Altijani Mustafa from University of Khartoum, Sudan said the summit has looked into the problems and conflicts affecting the Muslims countries and ummah as a whole and has tried in a very sincere way to find the reasons and solutions for those issues.

“As we know, Dr Mahathir (Malaysian Prime Minister Tun Dr Mahathir Mohamad) is a real Muslim leader, the one who can transfer his words to actions, so I do believe that KL Summit will play a very good and great role in changing the the situation of the ummah,” she said.

A delegate from Switzerland, Khaldoun Dia-Eddine, who is the Head of Middle East and Business Desk of Zurich University of Applied Sciences, said the summit has sent a signal that Muslims have a strong will to overcome the problems and crisis surrounding them.

She said Muslims around the world are waiting to see the next steps in the form of actions resulting from this gathering.

“Now the key challenge is to translate those instruments into implementation and real practice,” Chair of Fatwa Committee from Turkey, Dr Haitham Al Haddad said

The KL Summit should be a wake up call for the ummah to stand together in helping each other especially those suffering from any threats or danger, said Sirajul Islam, a delegate from United Kingdom.

President of Palestinian Solidarity Association in Turkey, ââââMohammed Mesheinesh said he is happy that all the leaders at the summit acknowledged the issue of the Palestinians in their addresses.

“All leaders want to solve this problem because they know that all of us Palestinians want to live in our own country but it is under occupation. They understand that it’s the main problem of the ummah,” he said.

“Hopefully all resolutions can be implemented and the whole Muslim world can be united and benefit through it. We think the summit will enrich all the ummah in India and all over the world.

Hamas official Dr Osama Hamdan said the summit was a good beginning to bring positive changes to the Muslim community but cautioned that a lot is needed to make it happen. (Bernama) 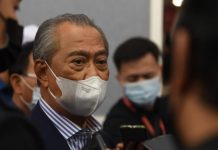