He pointed out the revived Bandar Malaysia, with an estimated total gross development value of RM140 billion, would herald a new era of economic momentum that benefited the masses.

“Engagement and collaboration with Chinese companies bring huge dividends to local players, as they would learn and rewind to align themselves with market forces and efficiency level.

“The government is cognisant of the fact that infrastructure investment can help spur growth, generate employment and provide structural stability to the economy. At the moment, the government looks totally committed in its strategic focus on development, infrastructure and growth,” he told Bernama TV in an interview here on Tuesday.

Shan, who has more than 18 years of financial market experience in private banking, risk/compliance management, commodity investments, global economy, brand and business strategy, was asked to comment on the recent revival of the 196.7-hectare Bandar Malaysia project in Kuala Lumpur following a signing ceremony between Minister of Finance Inc’s unit TRX City Sdn Bhd and IWH-CREC Sdn Bhd, which is jointly owned by Malaysian and Chinese companies.

Shan said as countries navigated through turbulent times, infrastructure investment had become a new obsession for many economies in the ASEAN region.

Citing various reports, including from The Economist and the Wall Street Journal, he said ASEAN required US$1.2 trillion in infrastructure investment that could buttress growth in the region.

Shan said infrastructure investment had a direct correlation with gross domestic product growth (GDP) outlook with a large impact at the macro level.

“Foreign direct investment would keep (coming in) a steady flow because of three main reasons — because Malaysia is an important player in the Belt and Road Initiative, is strategically located along the Straits of Malacca, and has a young, tech-savvy labour force,“ he said.

Shan said Malaysia would continue to be on the global investors’ radar due to its political and economic stability and infrastructure stability that bolstered the outlook of the ringgit, which remained structurally stable and was expected to move around 3.97 to 4.30 against the greenback in 2020. — BERNAMA 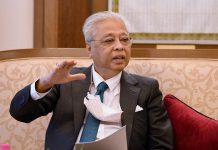 Dhabitah misses out on bronze but wins Malaysian hearts with radiant...

I’ll quit if party tells me to do so, says Umno...