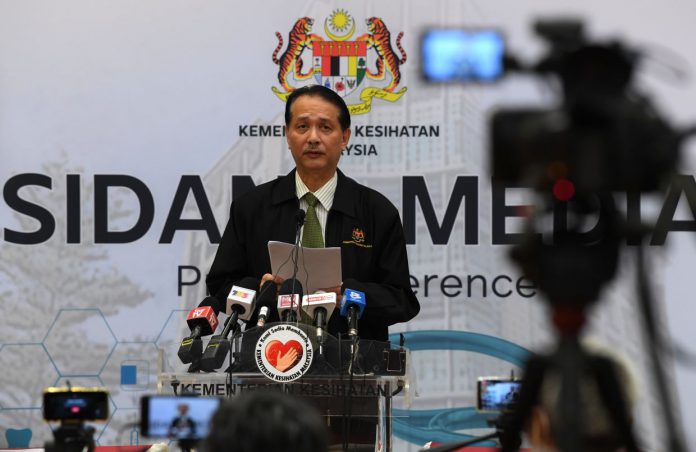 He said the ministry’s modelling found this could be achieved if the SOPs, particularly on social distancing, wearing of face masks, frequently washing hands or using hand sanitisers were strictly followed.

The low new infections, high discharge and low mortality rates gave confidence that the much desired milestone could be achieved, he said at his tri-weekly press conference to update on the COVID-19 situation in the country, here today .

He cited a New England Journal of Medicine report that stated that social distancing alone could contribute to a 65 per cent drop in new infections as a factor for the confidence.

The statistics back up his confidence, with just six new positive cases reported today versus 45 recoveries while there were no deaths.

Yesterday, there were only three new cases while nine people had recovered.

With COVID-19 cases in the country sky-rocketing before Malaysia imposed the Movement Control Order (MCO) on March 18, the steps taken to contain the pandemic had borne fruit, the DG said

He added that it was this success that allowed the MCO to be first relaxed as the Conditional MCO from May 5 and thereafter as the RMCO from June 10.

He praised the people for showing good compliance to the SOPs and stressed that the zero new positive cases goal could only be achieved if they continued to strictly do so.

The RMCO, which is scheduled to end Aug 31, has enabled almost all economic sectors in the country to reopen and lifted most of the restrictions on people’s movements.

Meanwhile, Dr Noor Hisham said the reason social gatherings like for weddings, anniversaries, birthday parties and religious events were being allowed from July 1 was because the COVID-19 situation has been well managed.

He said it was to allow a strike in balance between “life and livelihood” so that there could be a semblance of normalcy but without compromising on the the need to follow the SOPs.

However, he said the Health Ministry would remain vigilant and that the venues of these gatherings would be ordered to close if they contributed to new cases.

“If there is a spread of COVID-19 at these events or the locality, we will close the venue or the hotel if that is the case,” he said.

Asked when water theme parks will be allowed to reopen, Dr Noor Hisham explained that crowding at these premises was the main factor why the matter had to be carefully considered first.

He said monitoring of the related SOPs will start with swimming pool recreational activities first, which are allowed from July 1.

“The issue here is not the water itself but crowding. We will have to monitor the situation first, If we can control crowding in swimming pools, maybe then we can allow water theme parks to reopen,” he said.

COVID: Gov’t to focus on one general SOP, nine guidelines –...