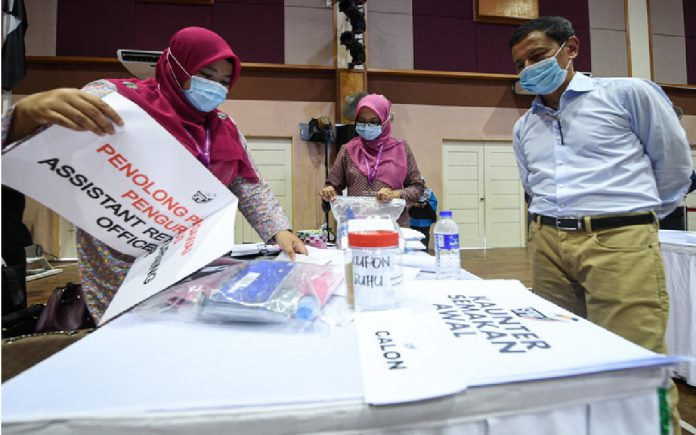 Election Commission (EC) chairman Datuk Azhar Azizan Harun said in a statement today that these people will cast their votes at the Information Room at the Chini Police Station.

He said the early voting centre will be open from 8 a.m. until noon.

“During the early voting process, preventive steps against COVID-19  must be adhered to, including social distancing, use of face masks, hand sanitiser, and gloves, as well as temperature screening,” he said.

Azhar added that a video on the proper voting practices in the new normal has been made and can be viewed on the SPR or Akademi Pilihan Raya Facebook page.

He added that the early voting process will be witnessed by agents of the candidates and election observers appointed by the EC, and will also be telecast via live streaming on the SPR Facebook account.

He said all the ballot boxes for early voting will be kept at the police station lock-up and counting will be conducted on polling day on July 4 at the counting centre in the Information Room at the Paloh Hinai Police Station.

There are 20,990 registered voters for the Chini by-election comprising 20,972 ordinary voters and 18 early voters.

The Chini state constituency, one of four under the Pekan Parliamentary constituency, is the first by-election to be held after the Movement Control Order (MCO) was imposed on March 18.

It is also the 11th by-election called following GE14 and the first for Perikatan Nasional (PN) after it took over the country from Pakatan Harapan (PH).

All are free to criticise but views should be constructive –...