Kuala Lumpur Dec 29 (Bernama) — Persatuan Usahawan China di Malaysia (PUCM) or China Entrepreneurs Association in Malaysia is celebrating five years of building bridges between China and Malaysia. To mark the occasion, PUCM has released a five-minute video recapping important events in its history, and including congratulatory messages from the Raja Muda of Perlis, Tuanku Syed Faizuddin Putra Jamalullail, and YB Dato’ Saifuddin Abdullah,  Minister of Communications and Multimedia as well as other VIPs.

“I understand that PUCM has been actively promoting Chinese companies and communicating with the local community through such creative methods as holding trade exhibitions, shooting Chinese New Year and Hari Raya video clips, holding seminars and forums, interacting with the Bumiputera community and holding charity events. PUCM also interacts regularly with local and international media,” Saifuddin said in his message.

PUCM was established in 2015 and currently has over 160 company members. It is one of the most active and locally recognised association of China companies in Malaysia.

PUCM members have been contributing to economic growth of the nation through various industries including information technology, construction, mining, oil and gas, telecommunications, solar energy, retailing, manufacturing, tourism, and F&B .

PUCM also set up a Pahang Chapter and an artificial intelligence chapter, aiming to strengthen ties across Malaysian society – with both government and private sector, and in various regions.

PUCM members keep tabs on happenings in Malaysia, including developments in its economy and business through a subscription agreement with the Malaysian National News Agency, Bernama.

PUCM members has donated over three million ringgit in medical supplies and cash to Malaysia and China authorities and agencies to help fight the covid-19 pandemic, illustrating PUCM’s passion and concern for both nations at this time of need.

Communications minister Saifuddin said he was pleased that PUCM is publishing a 5th anniversary special edition of its magazine and newspaper to showcase the milestones and achievements of its journey from 2015 to today.

“I sincerely hope that this publication could be very helpful to spread positive energy and further enhance bilateral relations between two nations. I’d like to wish all the members of PUCM a happy 5th anniversary and a great success in their future endeavours,“ the minister said. 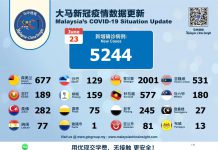