KUALA LUMPUR，Mar 8: After one year under the Perikatan Nasional government, PAS president Abdul Hadi Awang is convinced that the people could evaluate which government has done better.

He believes that Malaysians themselves were aware of PN’s record all this while, and also that of Pakatan Harapan during its two years in charge of the federal government.

“Compare the achievements and successes of the PN government today after one year of its administration amid the Covid-19 pandemic,” he said in a posting on his official Facebook page.

Hadi, who is MP for Marang, said he himself admitted that it would be difficult for PN to clean up the “mess” left by the PH government during its rule.

“Like what the elders say, it’s more difficult to repair something than to destroy it,” he added.

Unfortunately, Hadi said, there were still those who were still influenced by the empty talk of PH which was still raring to take over the government.

He reiterated that the change of federal government from PH to PN was done in a clean and democratic way and in accordance with the Federal Constitution. “It was the most appropriate step, without entering through the roof or back door,” he added. 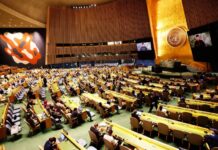 Users of newly opened SUKE Expressway reminded not to stop at...