Putrajaya district police chief ACP Mohd Fadzil Ali, in confirming the matter to the press, said the case was being investigated under Section 500 of the Penal Code and Section 233 of the Communications and Multimedia Act 1998.

Mohd Fahmi Reza, when met outside the Putrajaya IPD after the two-hour-long session, told reporters that the probe was conducted on his two caricature postings dated Oct 3, last year and Feb 15.

“I’m here to explain to the police the meaning of the artworks, their purpose, to whom they were addressed and others,” he said, adding that he would not take down the postings and would continue producing artworks.

Mohd Fahmi Reza, who was accompanied by his two lawyers Yohendra Nadarajan and Rajsurian Pillai, said he was ready to give full cooperation to the police and would be present if he was summoned again. 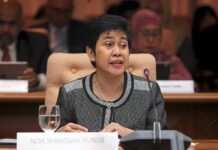