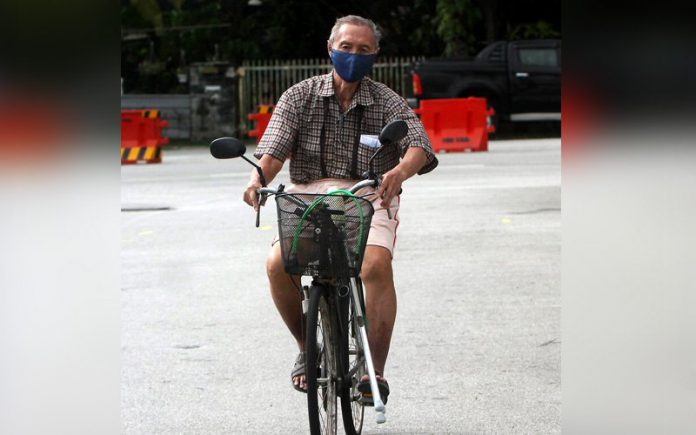 IPOH, June 3 — A senior citizen, Yau Pak Chee 73, always rides his old bicycle nearby the Vaccination Centre (PPV) at the Indera Mulia Stadium to buy food as well as meet his friends.

He would cycle for about two kilometres from his house in Ipoh Garden to the PPV and one day, the former salesman noticed a health worker who was pacing back and forth and decided to approach her.

Who would have thought that he would gather enough courage to ask the health worker how to get vaccinated after regularly watching Bernama TV about the importance of taking the vaccine in fighting the COVID-19 pandemic.

“I don’t have the things young people have like a smartphone, laptop or the Internet. But I still want to be vaccinated. ‘Lindung Diri, Lindung Semua (Protect Yourself, Protect All) have been playing in my head. So I need to get the vaccine,” he told Bernama.

The predicament of ‘Uncle Pak Chee’ as he is fondly known, caught the attention of the Perak Health Department public relations officer Suraya Baharudin who happened to be at the PPV. She immediately helped with his registration after checking the eligibility of the senior citizen.

Uncle Pak Chee was then given the first dose of Sinovac shot two hours after sharing his predicament with the health worker thus adding to the population of at-risk groups in the state who had been vaccinated.

“I don’t feel any pain, I’m relieved, I’m happy! I wish to tell those people out there, don’t be afraid to take the vaccine. There is nothing to it,” he said excitedly after the vaccination process was completed. He is scheduled to receive the second dose on June 23.

Uncle Pak Chee, who is also looking after his two older brothers aged 83 and 90 respectively, hopes that both of them will also be given the vaccine and it is understood that the department is looking into the application.

In the meantime, according to Suraya, the health staff at the PPV will try to help solve various problems of those who may have the same predicament like Uncle Pak Chee and other individuals (who are eligible) including rescheduling appointments so that more people will get the vaccine in the state.

Yesterday, Perak Menteri Besar Datuk Saarani Mohamad said that not receiving calls and transportation problems were among the reasons why about 9,000 residents in Perak did not turn up to receive vaccination earlier and that his office was trying to find a solution.

On May 26, a total of 9,000 individuals in Perak, failed to turn up for vaccination appointments, most of whom were aged 60 and above, while state Health Exco Mohd Akmal Kamarudin said as of last Friday, a total of 237,204 people had received their COVID-19 vaccine shots in Perak.

Najib did not go to Switzerland to retrieve SRC money –...