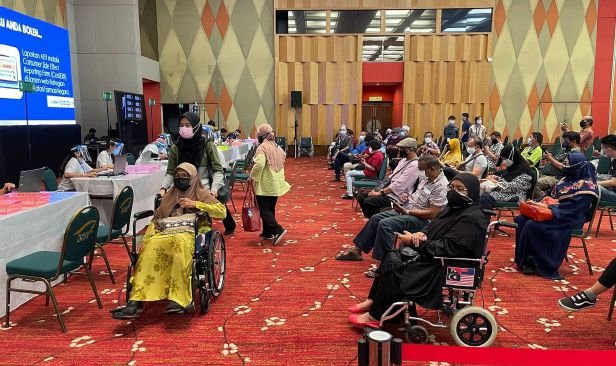 JOHOR BAHRU, June 7  — Vaccine recipients are satisfied with and full of praise for the efficiency and facilities at the AstraZeneca vaccination centre that began operating at the Persada Johor International Convention Centre (Persada) here today.

The recipients, including the elderly, people with disabilities (PwD) and those with chronic diseases, as well as those who registered voluntarily for the AstraZeneca vaccine, said that the vaccination process was very organised and fast, while noting that the explanations provided by the attending health officials were very clear and detailed.

Vaccine recipient Idris Ahmad, 67, said the facilities at the Persada centre, such as the parking lots, wheelchair lanes, waiting areas, as well as the security teams and volunteers on hand were all very helpful, adding that he was pleasantly surprised that he and his wife were able to complete the vaccination process in less than an hour.

Idris, who was the first recipient of the day, said that he and his wife, Azmah Harun, 64, arrived at the centre at 7.45 am after being driven there by their son from Taman Peserai, Batu Pahat.

“Thankfully, the vaccination went well, quickly and was organised. The directives given were very clear. Those on duty were very helpful in guiding us through the process to the vaccination area. It was so comfortable and we didn’t even break a sweat,” he told reporters after receiving his shot.

Asked what motivated him and his wife to sign up for vaccination, the retired teacher said his son had signed them up online through https://www.vaksincovid.gov.my/ and that he wanted to protect his family and himself as quickly as possible.

For Azmah, who uses a wheelchair to get around, she said she was relieved and lucky to get a vaccination appointment on the same date and time as her husband at the Persada centre.

“My husband and I were fast-tracked. The facilities are elderly- and disabled-friendly, and it felt so welcoming when we went through the stations at the centre. I intend to share my experience with my friends to allay their fears and concerns about getting vaccinated,” the fellow retired teacher said.

Effendy Bala Abdullah, 71, who lost both his legs due to diabetes and a road crash four years ago, admitted that he was unfazed when receiving his shot, likening it to any other vaccination.

Effendy, who is a former soldier, also advised Malaysians, especially the elderly who have co-morbidities, to register themselves and be vaccinated as they have a significantly higher risk of being infected by COVID-19.

A total of 500 AstraZeneca vaccine doses are available at the Persada centre daily today and tomorrow while 3,000 doses would be available daily from June 9-July 27.

For the record, 133,000 people are expected to receive their vaccination shots at the centre in stages from today until July 27.

A Bernama survey at the centre found that vaccine recipients began arriving at around 7.45 am and there was no traffic congestion. There were no long queues either inside or outside the building and at all the five stations in the vaccination centre.

All recipients need to go through five stations, with a temperature and MySejahtera app check at the first station, followed by station two for registration, station three for consultation and authorisation, station four for vaccination and station five for 15 minutes to 30 minutes of observation.

The vaccination process at the Persada centre is being carried out under the watchful eyes of the security team comprising the armed forces, police, fire and rescue department, Civil Defence Force and the People’s Volunteer Corps (RELA).

More restrictions eased for fully vaccinated in Phase One states, including...