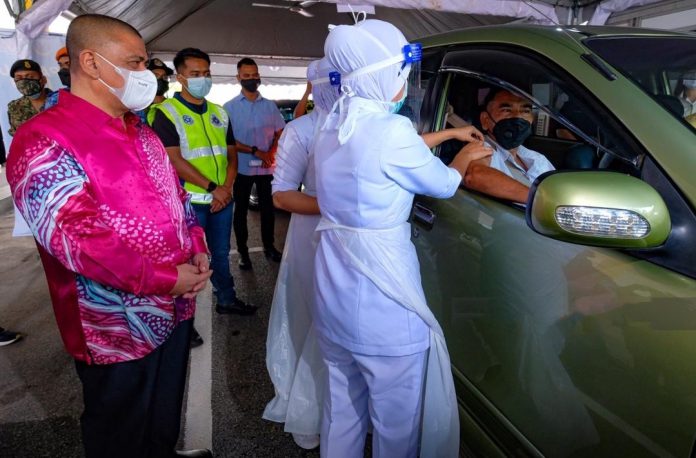 IPOH, June 10 — Getting a COVID-19 jab is a breeze at Indera Mulia Stadium (SIM) here, taking only 10 minutes at its drive-through vaccination centre (PPV) compared to one hour at other centres.

Perak Menteri Besar Datuk Saarani Mohamad said 100 people who turned up for their second dose today were the first group to benefit from the SIM PPV, the first drive-thru facility in Perak.

He said the number of jabs administered at the drive-thru PPV is expected to increase gradually.

“The idea to provide the drive-thru service is to ease the challenges faced by the elderly who have to queue up using wheelchairs, walking sticks and requiring attention during the vaccination process.

“An increase in the number of drive-thru counters is also expected to boost the number of vaccine recipients at the SIM PPV to 2,500 a day.

“The move was also taken in preparation for the coming phase (under which those aged below 60 will be vaccinated) which is expected to involve many more recipients,” he told reporters after launching the drive-thru vaccination centre.

He said the efficiency of the team handling the drive-thru vaccination would be tested in stages, and the service is now limited to those getting their second dose as it is a simpler process.

Asked on the opening of a second drive-thru PPV, near the Sultan Azlan Shah Roundabout in Bandar Meru Raya here, as announced earlier by Deputy Health Minister Datuk Dr Noor Azmi Ghazali, Saarani said the proposal was still being studied.

“We have to study first because we do not want vehicles to queue up and cause traffic congestions,” he said, adding that the state government is also looking into opening up drive-thru PPVs in other districts.

“Based on the list of 123 media personnel received by the management today, the notifications will be sent out in stages,’’ Dr Ding said.