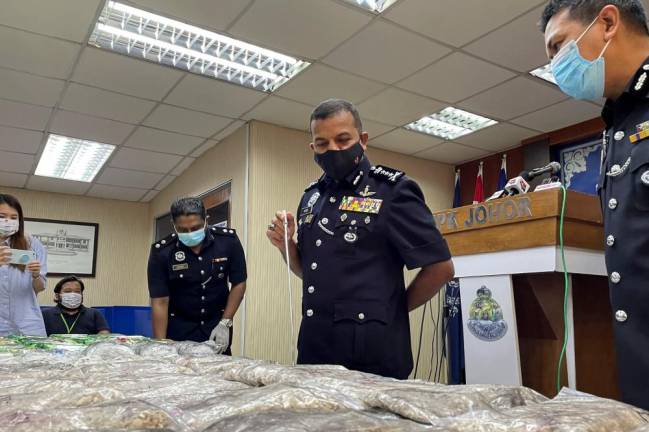 JOHOR BAHRU, June 11 — Johor police have thwarted the activities of a drugs distribution syndicate with the arrest of four people and seizures of drugs worth RM1.8 million in the city recently.

Johor police chief, Datuk Ayob Khan Mydin Pitchay said the activities were detected through three special operations here from June 9 to 10 between 3.30 pm and 12.15 am.

He said a local couple, aged 21 and 24, were arrested and heroin seized in the first raid at a gated and guarded condominium unit.

“They also tested positive for THC,” he told a media conference at the Johor Police Contingent Headquarters here, today.

In addition, Ayob Khan said the police also seized two cars during the arrests, worth RM40,000.

He said the four detained were believed to be runners and storekeepers for the syndicate which had been active since last April.

“All the individuals were remanded for six days from yesterday until June 15 for further investigations under Section 39B of the Dangerous Drugs Act 1952.

Act 505 amendments to be tabled in Nov – Zulkifli