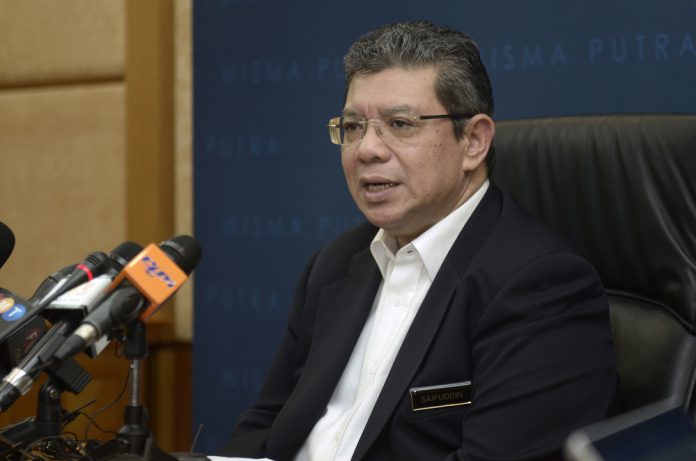 PUTRAJAYA, June 16 — The proposal for Parliament sessions to reconvene in September or October, in the third phase of the National Recovery Plan, is appropriate as the country is still in the emergency period until Aug 1, said Communications and Multimedia Minister, Datuk Saifuddin Abdullah.

He said in the third phase, the social sector would also be opened in stages.

“Why September or October? I think he is referring to the third phase, and by then the social sector has started to open up in stages. Hence, it is exactly what the Prime Minister said, that the Dewan Rakyat sessions can reconvene in September or October,” added Saifuddin.

Yesterday, Prime Minister Tan Sri Muhyiddin Yassin gave his commitment that Parliament will reconvene in the third phase of the National Recovery Plan, probably in September or October, subject to strict SOPs.

Muhyiddin said that it was his stance from the beginning that the parliamentary democracy system could function again when the time is right, that is when the COVID-19 cases are under control, and the country almost achieved herd immunity.

Saifuddin said that there were at least three views on how parliamentary sessions could be conducted; namely, physical presence in the Parliament, hybrid and virtual.

He said that there were several views on how the Dewan Rakyat session should reconvene.

One of the views was that the sessions must be conducted face-to-face in the Dewan Rakyat, and this view was based on the current Standing Orders (of the Dewan Rakyat), he said.

He is also of the view that amendments should be made to the Standing Orders so that the parliamentary session can be conducted via either hybrid or virtual.

On June 4, Minister in the Prime Minister’s Department (Parliament and Law), Datuk Seri Takiyuddin Hassan, was reported to have said that the government was studying holding Dewan Rakyat and Dewan Negara sessions in a hybrid manner, to ensure that Parliament could play its role even during the COVID-19 pandemic.