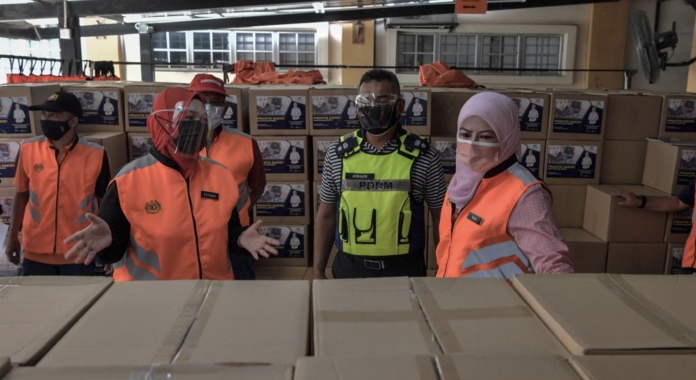 Its minister Datuk Seri Rina Mohd Harun said towards that purpose, KPWKM was cooperating with various parties including other ministries, agencies, the private sector and non-governmental organisations (NGOs) to ensure the vaccination process is expedited.

“For example, more than 50 percent of the 2.4 million senior citizens who registered for the vaccine have already received it, with 10 percent of them having completed two doses.

“For persons with disabilities (PwD), vaccinations are actively being carried out. Besides the PPV at the Malaysian Association for the Blind (MAB) Complex and the first drive-thru PPV for PwD, we will open up more special PPVs for this targeted group,” she said.

She was speaking to reporters after handing out food basket contributions at the Desa Rejang People’s Housing Project, which is under the Enhanced Movement Control Order (EMCO) from June 18 to July 1.

In addition, KPWKM has also mobilised volunteers under its agencies, including the Social Welfare Department (JKM), National Welfare Foundation and Skuad Prihatin Negara in the registration and advocacy process of target groups.

Meanwhile, Rina also called for the vaccination of children to be expedited as more than 82,000 of them had been infected with COVID-19.

She said the vaccination process for students who will sit for Sijil Pelajaran Malaysia (SPM) and Sijil Tinggi Persekolahan Malaysia (STPM) should also be given priority to protect them.

A total of 3,000 food baskets and also items contributed by other parties, including NGOs, were distributed among PPR Desa Rejang residents today.