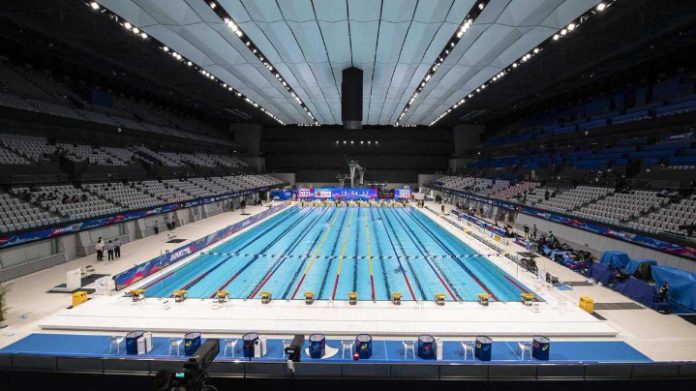 TOKYO, July 21  — The COVID-19 pandemic and subsequent lack of international competition are some of the elements expected to make the nine-day swimming events at Tokyo Olympics the most unpredictable ever.

The events, which start on Saturday and include 35 disciplines in total, mark the introduction of the first ever mixed-gender swimming contest on the Olympic stage with the mixed 4x100m medley relay.

Tracey Holmes, a senior sports reporter and presenter with the Australian Broadcasting Corporation who is to cover her 12th Games in Tokyo, said it would be hard to predict performances of swimmers.

“We don’t really know what the world rankings are like in so many sports because there hasn’t been proper competition with everybody involved,” she told Xinhua in an interview last week.

Spectators are another element that could affect athletes’ performances, as this year’s Games will go ahead with no spectators in attendance.

Therefore, Holmes said that some swimmers who rely on an atmosphere to get them going would be disappointed, whereas others who get nervous in front of a large crowd could feel more comfortable.

However, the veteran journalist showed her confidence in Australian swimmers, some of whom she said “have hit form at the right time.”

Her observation is reflected in FINA’s rankings, especially in women’s competitions, where Australian swimmers produced many world-leading results in 2021 after their eye-catching performances at the national swimming trials in Adelaide in June.

Cate Campbell, 29, followed McKeon in the two short distance freestyle events in the rankings, meaning Australia is the favourite to take gold medals in the sprints.

“I think the lack of international competition means it is going to be more unpredictable than ever,” Campbell told News Corp media.

“I think it is going to make it one of the most exciting Olympics you have ever seen because so much can change in a year.”

In the women’s butterfly, Chinese and American swimmers had the leading results so far this year.

Zhang Yufei, who claimed five gold medals and one silver at China’s National Championships in May, is regarded as a medal contender for both 100m and 200m disciplines.

Zhang, 23, and the US’s Hali Flickinger, who finished sixth and seventh in the 200m butterfly at Rio Olympics, are now one and two in the world rankings.

In the 100m competition, Zhang had recorded the world’s second best result in 2021, trailing American Torri Huske, 18, who had a career highlight in 2019’s World Junior Championships with victories in two butterfly events.

Titmus, 20, put the world on notice with her performance at the Australian Swimming Trials in June, where she set the world’s fastest 200m and 400m times in 2021.

Those performances prompted Swimming World magazine to rank Titmus as the top female swimmer in the world in the lead-up to the Olympics, followed by Ledecky.

China’s 19-year-old Yang Junxuan will also compete in the 200m freestyle. Her result from the National Championships in May put her third in the rankings, behind Titmus and Ledecky.

On the men’s side, American sprint specialist Caeleb Dressel, who became the first swimmer to win eight medals at a single world championships in 2019, will be favourite in the 50m and 100m freestyle and the 100m butterfly.

Hungary’s 21-year-old Kristof Milak, who will make his Olympic debut in Tokyo, is the overwhelming favourite for the 200m butterfly, after his four swims from March to June all led the world’s competitors in 2021.

The 200m world record holder is also a medal contender in the 100m butterfly, where his result at the European Championships puts him No. 4 in the 2021 rankings.

In the 200m freestyle, British duo Duncan Scott and Tom Dean lead the world rankings, and their teammate Adam Peaty, the world record holder in the 100m breaststroke, is the favourite to defend his title in the event after the world’s top four results in 2021 all came from him.

Despite “a very challenging and unpredictable period of preparation and training” for all athletes, FINA believed the delayed 2020 Olympic Games “will be a huge success” for aquatic sports.

“Tokyo will of course not only be an opportunity for athletes to be back in an Olympic venue, in the pool, at the end of a diving board, on the field of play, or in the open water,” said FINA in June.

“It will be a celebration of resilience, of solidarity, and of our shared humanity.”