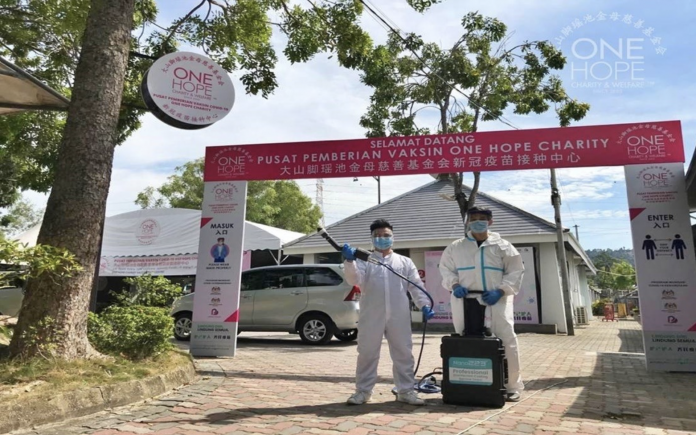 BUKIT MERTAJAM,  July 25  — One Hope Charity & Welfare (One Hope) has invested over RM2 million to set up a COVID-19 vaccination centre (PPV) at the Shop-In d’Park Auto City, Juru here, which is expected to begin operations on Monday July 26.

Chairman Chua Sui Hau said with the PPV launch, One Hope would be among the first non-government organisations (NGO) in Malaysia to have set up a PPV.

Chua said that they had received the approval from the Ministry of Health to open the centre on July 14 and had spent one week transforming the outdoor-themed shopping centre into a PPV.

“Furthermore, One Hope will have over 200 of its staff members manning the PPV and our own medical personnel will be in charge of the vaccination process,” he told Bernama.

He said the team had a trial run on July 23 to familiarise with the whole procedure, from the screening, consultation, vaccination up to the monitoring process.

He expected that that the opening day  would see about 360 recipients getting vaccinated and the number would increase over time.

According to him, the PPV will operate from Monday to Friday between 9 am and 5 pm.

Meanwhile, Chua said that the extensive space at the venue would not only be able to cater to a large number of recipients, but the natural outdoor aesthetics would also help calm their mind.

He said that the main photo booths can be found at the one-way exit of the PPV, but the colourful elements from the existing outdoor-themed shopping centre, such as the Predator sculptures, can be found around the premises.

“Hopefully, the PPV could help the recipients to relax their mind and body after the impact of the ongoing lockdowns following the COVID-19 crisis, ” he added.