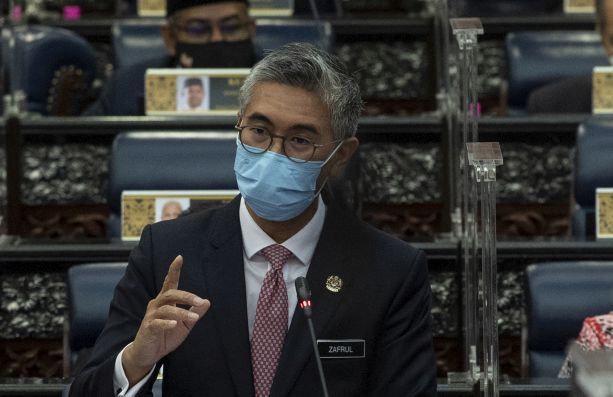 KUALA LUMPUR, July 29 — The government will implement consolidation measures to strengthen its fiscal position including broadening the revenue base, enhance the tax administration and compliance, as well as increase the efficiency in spending to control the fiscal deficit level when the economy is restored, said Finance Minister Tengku Datuk Seri Zafrul Tengku Abdul Aziz.

He said the measures to reinforce the government’s financial position, particularly those relating to revenue, was very important to ensure its financial standing will come back strongly and is resilient in the medium and long term.

“Before the COVID-19 pandemic hit the country, we are consistently on track to strengthen the fiscal position since the country had overcome the global financial crisis in 2009, whereby our deficit was reduced to 3.4 per cent from 6.7 per cent in 2019, before rising back to 6.2 per cent in 2020,” he said during a briefing session at the Special Meeting of the Third Session of the 14th Parliament today.

Tengku Zafrul, who is also the Coordinating Minister for the National Recovery Plan (PPN), said the government would propose amendments to ease the regulations on the debt ceiling to support the economic recovery plan based on its capacity to borrow.

Up to June this year, the statutory debt level had reached 56.8 per cent, however, it is still below the statutory limit of 60 per cent of the Gross Domestic Product (GDP).

“With the limited fiscal space, the government has no choice but to optimise the existing sources of financing through rationalising the expenditures, increase revenue from its ecosystem including utilising the National Trust Fund (KWAN), as well as be prepared to raise the ceiling of the COVID-19 Fund (KWC-19),” he said.

The continuity of the PPN will be fine-tuned and put together with the other recovery and empowerment efforts through Budget 2022 and the 12th Malaysia Plan, which will be tabled in the next few months.

“The government admitted that even with the implementation of more than 450 programmes and initiatives via all assistance packages, there’s still room for improvement.

“Looking ahead, we will examine all feedback, claims and applications that we have received for consideration, more so in formulating Budget 2022 later,” he said.

Meanwhile, Tengku Zafrul said the official projection of the 2021 GDP will be announced in August together with the second-quarter report.