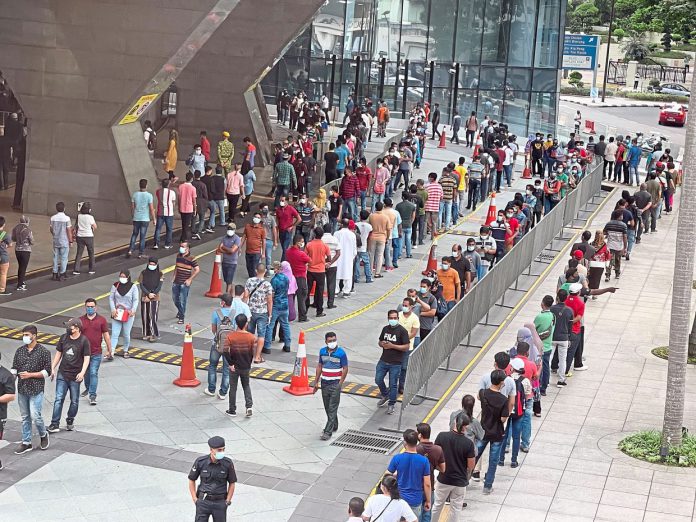 KUALA LUMPUR, July 29  — The COVID-19 Immunisation Task Force (CITF) is considering the need to designate several vaccination centres (PPVs) to cater for foreign workers according to language, so that the vaccination process can be conducted smoothly.

CITF, in a statement, said the move was to enable the required resources, such as translators or volunteers, to be stationed there, thus overcoming the problem of overcrowding in PPVs caused by the presence in large numbers of this group, resulting in violation of standard operating procedures (SOP).

“The failure of foreign workers in filling out forms and downloading the MySejahtera application has caused the process to take a longer time.

“Every foreign worker needs more than five minutes to fill in the form, and causes congestion at the registration counter. There are interpreters who help, but the process is still time consuming,” said the statement, commenting on the congestion that occurred in most PPVs in the Klang Valley yesterday.

To prevent the same problem from recurring, the CITF is also working with the police to block any vehicles such as buses from outside the Klang Valley, carrying either foreign workers or Malaysians en masse, to get vaccinated in the Klang Valley.

At the same time, the CITF has also amended the appointment dates for some vaccine recipients to reduce the number of attendees, so that congestion stemming from communication problems involving the foreign workers can be avoided.

“As a result of this move, overcrowding at the PPVs involved, especially in the afternoon, has been reduced today, and the matter will continue to be monitored to enable appropriate action to be taken from time to time,” read the statement.