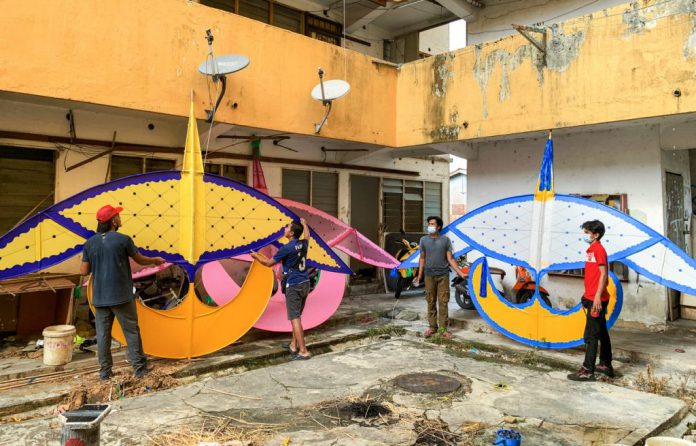 KOTA BHARU, July 30 — The COVID-19 pandemic did not stop a group of youths in Kampung Sireh here from pursuing their interest in making wau, a traditional kite widely found in Kelantan.

A check by Bernama at Kampung Sireh Flats found that  about seven to 10 youths were producing ‘wau puyuh’ (quail kite) or Wau Kelantan ordered by their customers.

According the group’s head, Muhd Nasru Aiman Mohd Zu, 31, they would continue producing wau puyuh even during the pandemic due to steady orders, and they did not want the traditional art to die out.

Even though it is seen as an old-fashioned craft compared to the modern gadgets, it still has its own fans, he told reporters when met here today.

“Alhamdulillah (Praise be to God), there are still young people in this area who are keen to learn how to make these traditional kites.

“Previously, we only made kites for competitions, but now the demand for giant-sized kites as decorative pieces is increasing,” he said, adding that they learned the kite-making skills from his 61-year-old father, Mohd Zu Man.

Muhd Nasru Aiman said despite the economic slowdown, they continued to receive four to five orders a month for a kite and each piece of giant-sized kite could be sold at the price of RM350.

He said the giant-sized kite needs more than five adult men to fly it.

CMCO Extended: Hari Raya to be celebrated in new atmosphere