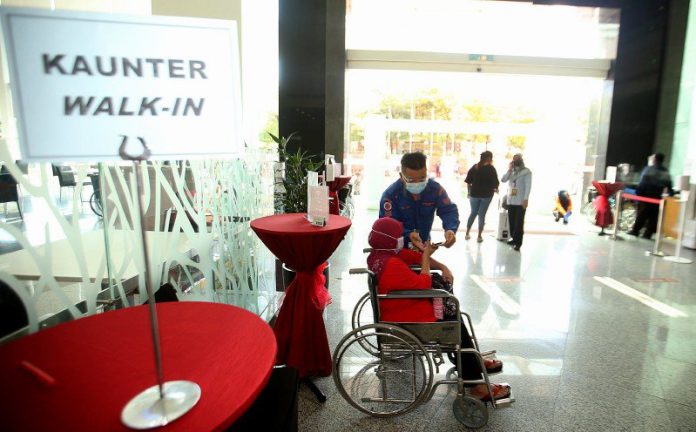 KUALA LUMPUR, July 30 — Walk-in vaccinations, expected to begin on Aug 1, will help speed up efforts to curb the COVID-19 pandemic and increase the immunisation rate in the Klang Valley, where most of the cases are currently being reported.

Health deputy director-general (research and technical support) Datuk Dr Hishamshah Mohd Ibrahim said with the programme, those who had not received an appointment could finally get the first dose of vaccine.

“When we implemented the ‘walk-in’ method for those aged 60 and above about two weeks ago, we found the vaccination capacity in the Klang Valley was able to cater to the huge demand.

“Hopefully, on Aug 1, we can also accommodate the projected increase in numbers at vaccination centres, and hopefully, with the measures and strategies we have in place, we will be able to control the congestion,” he said during an online briefing session with members of the media.

He said apart from getting assistance from various agencies to control the crowd, live video streams would also be made available to show the current situation at the respective PPVs.

“With the live streams, those who want to get the vaccine at any of the PPVs can know whether it is crowded or not…and decide if they wish to go on the day,” he said.

Meanwhile, on the situation at Kuala Lumpur Convention Centre (KLCC) PPV on Wednesday which saw foreigners queuing up until the sidewalk of the main road to get inoculated, Dr Hishamshah said the issue had been resolved yesterday, and it would be continously monitred to avoid any recurrence.

He said the Ministry of Health (MOH) had advised and reminded employers in the industrial sector to send their employees to get vaccinated in stages, rather than all together.

“The congestion in KLCC occured when factory workers and others came at the same time, some in dozens of buses at once…and some workers who were even brought in from other states to be vaccinated in the Klang Valley.

“We have advised the industry not to do so, so that the vaccination can be caried out in a more orderly manner, and so that other members of the public are not afraid to come… people become afraid when there are too many people, which could trigger PPV clusters, so we try to avoid (such situations),” he said.

In the meantime, he said although 85.5 per cent of the total adult population in the Klang Valley had received at least one dose as of July 28, the ministry was looking to further increase the inoculation rate to cover the entire population.

On the mixing of vaccines, Dr Hishamshah said only individuals who experienced severe reactions to the first dose of COVID-19 vaccine were allowed to use another type of vaccine for the second shot.

He said this included those who suffered from Anaphylaxis, a severe and potentially life-threatening allergic reaction.

“In cases where the first dose is taken and there is a severe allergic reaction, then we can administer another type of vaccine for the second shot… that we can implement,” he said.

He said, however, the MOH had no plans to administer two types of COVID-19 vaccines for the rest of the population, as there was currently no solid data regarding the efficacy of the method.

“At the moment, the official data is still not out yet, because there is a study going on in some countries looking at mixing the doses, and on whether there will be benefit if we proceed with such a strategy,” he said.

However, Dr Hishamshah said issues such as administering different vaccines or giving a third ‘booster’ shot, would be discussed at the Special Committee on COVID-19 Vaccine Supply (JKJAV) next week.

In the meantime, he said the MOH was always on standby to ensure there was sufficient oxygen supply at health facilities, and it had implemented various measures to the effect.

He said the ministry had purchased thousands of oxygen concentrators to be used in health facilities,  while the refilling of oxygen cylinders could now be done on-site at the COVID-19 Integrated Quarantine and Treatment Centre 2.0 at the Malaysia Agriculture Expo Park Serdang (MAEPS), as opposed to being refilled at factories.

“We have identified various methods on how we can get an adequate supply of oxygen throughout the country, especially for patients in need at hospitals.

“Our oxygen supply capacity at the moment is sufficient, and we are also looking at unexpected supply issues, so that we can be prepared for any eventualities,” he said.

Too many cases, so self-isolate first, patients told