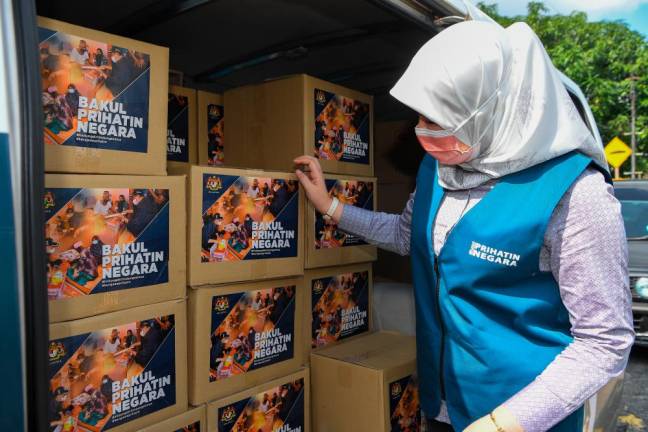 KUANTAN, Aug 5 — As her family’s income has been adversely affected, and her residential area was placed under the Enhanced Movement Control Order (EMCO), housewife Faridah Wan Ibrahim was deeply concerned about how to provide daily meals for her family.

However, Faridah, 44, who lives in Kampung Sungai Isap here, was able to breathe a sigh of relief after receiving help under the Bakul Prihatin Negara (BPN) (food basket assistance), distributed by the Pahang Social Welfare Department (JKM) which, to some extent, eased her family’s burden.

Although the assistance received was basic food items such as rice, vermicelli, flour and sugar, for Faridah it was sufficient and very helpful in ensuring that her family, including her three growing children, would not be cut off from food supply.

“I was very grateful to be selected to receive the assistance. The income of my husband, who is self-employed doing odd jobs, was uncertain during the pandemic, and even worse when our residential area was placed under EMCO, which just ended on July 31.

“At least our remaining savings can be used to buy wet goods as the supply of dry goods has been supplied,” she said when contacted by Bernama here today.

For Ahmad Farizan Musfa, 46, the assistance was much-needed support for his family, after he lost his income as a carpenter in a furniture shop with daily wages when he could not go to work.

The father of two, who lives in Sungai Isap Damai here, said that in order to continue his survival, he has been very frugal using his daily savings.

“Of course, with savings declining and necessities also needing to be bought according to priority, because we do not know when the situation will improve. This assistance helps ease the burden to some extent because we could save on kitchen expenses,” he said.

She said that, apart from through the state and district JKM operations room, any party who wants to apply for assistance can contact Talian Kasih at 15999 or by WhatsApp application 019-2615999, as well as through JKM’s official social media accounts on Facebook, Twitter and Instagram.

In the meantime, Rosmarlina also said that apart from the initiatives allocated by the federal government, the state government has also introduced Pahang Prihatin Assistance 2021 through the JKM, and among the assistance provided is a one-off contribution of RM250, to 2,169 senior citizens of JKM aid recipients, aged 80 and above.