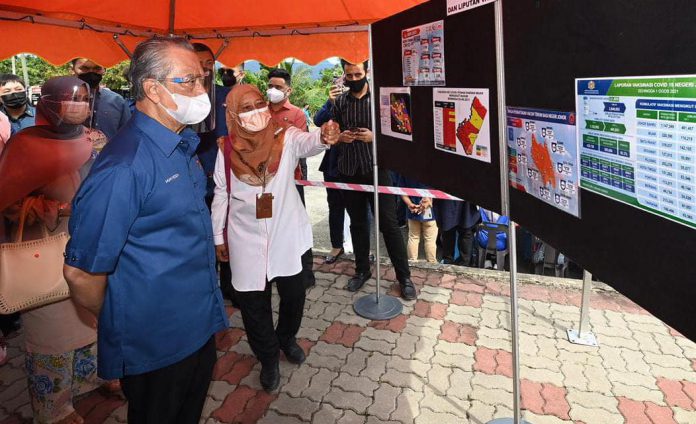 MUAR, Aug 5 — The federal government is targeting to get at least 40 per cent of Johor’s adult population inoculated by Aug 31 as it ramps up COVID-19 vaccination in the state, said Tan Sri Muhyiddin Yassin.

He said this was folllowing Sultan of Johor Sultan Ibrahim Sultan Iskandar’s statement expressing disappointment over the relatively low vaccination rate in Johor.

“I can see that in Johor it (vaccination rate) is still low compared to some states which have reached 60 to 70 per cent.

“So, the latest is that the minister has held a meeting with the Menteri Besar, and it is said that at least 1.5 million doses will be sent to Johor,” he told reporters after visiting the Felda Lenga mobile vaccination centre (PPV) in Pagoh, near here, today.

Muhyiddin said the government was targeting to send 1.7 million doses of vaccines to Johor to boost its vaccination capacity to 70,000 doses daily from the current 50,000 doses.

He said he had directed the ministers concerned to have an audience with Sultan Ibrahim and Tengku Mahkota Johor Tunku Ismail Sultan Ibrahim to explain the matter.

Muhyiddin said the issue on the vaccination rate was due to the fact that vaccines procured by the government did not arrive according to schedule.

“So, sometimes the committee under the ministers had to buy additional (vaccines) from local company Pharmaniaga to meet any shortfall in delivery.

“In terms of supply, by right there should not be any problem because we have booked more than 130 per cent of the country’s requirements, which means there is an excess but the delivery was not according to the schedule we want,” he added.

He said this vaccine delivery problem was partly caused by the very high demand for vaccines golabally.

Muhyiddin said overall, Malaysia had achieved a vaccination level that the country can be proud of.

“We will further increase it and with the intensified vaccination, (more sectors of) our economy can be opened,” he said.

Malaysian companies urged to leverage on data and AI