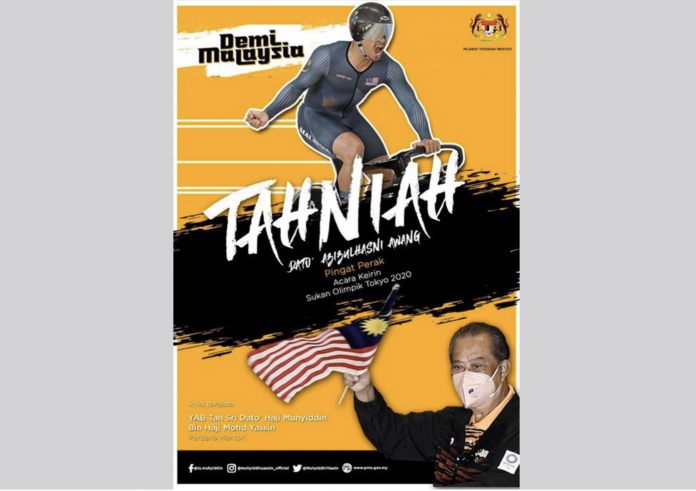 The prime minister said his success would definitely add cheer to the Malaysian contingent before the games come to a close today.

“Whatever its colour, the medal you won at the world’s biggest sporting stage has a very significant meaning for you and the country, as we could see the Jalur Gemilang being raised. All the people of Malaysia are truly proud of your achievement and fighting spirit.

“I too was moved on seeing tears of joy just now. We in Malaysia fully understand the emotions and difficulties you have experienced throughout these games. Thank you for all your sacrifices for the country,” he said in a post on his official Facebook.

In a dramatic final, Azizulhasni, nicknamed The Pocket Rocketman, crossed the finish line just ahead of the Netherlands’ Harrie Lavreysen to clinch silver, while Jason Kenny of Great Britain retained his gold medal.

The prime minister also conveyed his greetings to Muhammad Shah Firdaus Sahrom, who overcame pain to compete in the quarter-finals.

“To Muhammad Shah Firdaus Sahrom, I would like to say that your failure to accompany Azizulhasni to the final should not break your spirit.

“Your determination and spirit in fighting for Malaysia by casting aside pain in the heats and quarter-finals in itself showed that you are a hero who deserves respect. Thank you, Shah Firdaus,” Muhyiddin said.

Muhammad Shah Firdaus missed out on the semi-finals after finishing last in Heat Two of the quarter-finals.

The 25-year-old had on Saturday (Aug 7) suffered injuries after being involved in a collision with Jack Carlin of Great Britain in Heat Two of the first round that saw him being rushed to the Juntendo University Shizuoka Hospital for further treatment.

Cuepacs wants political leaders to have faith in civil servants