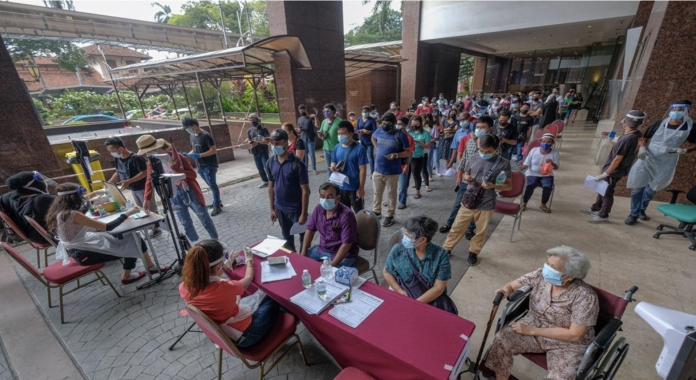 KUALA LUMPUR, Aug 11  — The overcrowding at Rumah Prihatin@ Grand Seasons here today was due to a misunderstanding that it was offering walk-in COVID-19 vaccinations for non-citizens, according to the management of the centre.

Walk-in vaccination for foreigners is actually being carried out at the vaccination centre in Bukit Jalil and not at Rumah Prihatin@ Grand Seasons.

The Rumah Prihatin @ Grand Seasons management, in a statement tonight, said it only provides walk-in vaccination for Malaysians, with priority given to senior citizens, persons with disabilities (PwD), and marginalised and vulnerable groups.

“At the initial stage, we took action with the police and Kuala Lumpur City Hall (DBKL) to disperse the crowd but they refused to budge despite being given warnings. However, the situation was eventually brought under control with the help of police and DBKL.

“The vaccination programme is managed by Rumah Prihatin under the MyMedik Vaccination Programme @ Wilayah and it did not involve other parties. We regret what happened and will further improve compliance with the standard operating procedure (SOP) to ensure this incident does not recur,” the statement read.

A seven-minute and 15-second video had gone viral showing big crowds gathering in the compound of the centre with no physical distancing, which drew negative responses from netizens.

“The compliance team managed to control the situation at the centre until the vaccination programme was completed,” he said in a separate statement.

He urged anyone with information on violation of SOP to contact the Dang Wangi district police headquarters at 03-26002222, Kuala Lumpur Police Hotline at 03-21159999 or the nearest police station.