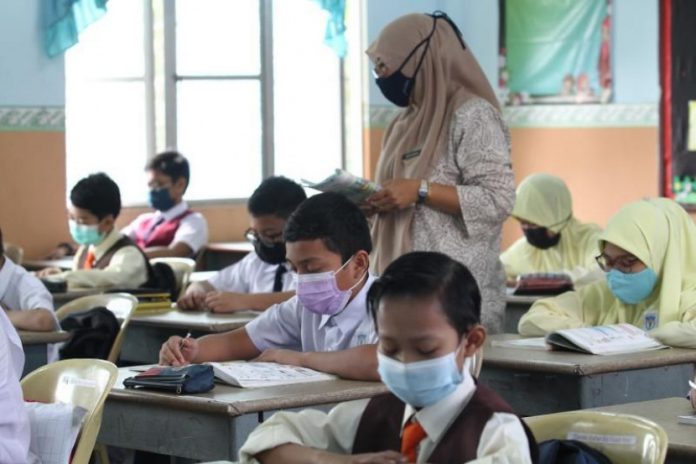 KUALA LUMPUR, Aug 13  — Due to highly infectious Delta variant evading immunity, children could be at great risk through the reopening of schools scheduled in September, according to a think-tank group

EMIR Research Head of Science and Technology Ahmad Ameen Mohd Kamal said the independent think-tank had suggested earlier that the very minimum indicator to reopen schools should be when all adults have been vaccinated, which has been targeted by October.

“Even so, it must be noted that this suggestion was based on the previous assumption that younger age groups are less likely to exhibit severe symptoms, and that the fully-vaccinated are most of the time protected.

“However, new variants such as Delta and recent breakthrough cases may prove that this is not the case and we could be putting children (and adults they are exposed to) at great risk through the premature reopening of schools,” he said in the research house’s article titled ‘Very Risky to Reopen Schools in September’.

Making up nearly 30 per cent of Malaysia’s population, Ahmad Ameen said those under 18 years old were the biggest unprotected group.

“Sooner or later, they have to be protected from the virus – either through vaccination or through natural immunity. Either way, it is too soon to gamble their fate,” he said.

According to November 2020 data by the Department of Statistics Malaysia, Ahmad Ameen said Klang Valley held the biggest share of children under 18 years at 24.4 per cent.

“Due to highly infectious variants evading immunity, causing breakthrough infections in fully-vaxxed individuals and insufficient mucosal immunity that challenge the traditional notion of herd immunity, even the fully-vaccinated adult population targeted by October may not suffice to protect both children and adults – what more by early September?

“The question now is between the risk of vaccine side effects versus the risk of infection and severity of symptoms from new variants of SARS-CoV-2. Understandably, many parents are not willing to take the chance through natural immunity given the potential risks,” he said.

Some parents, he said may want their children to be vaccinated first, while those concerned with both virus infection as well as vaccine side effects may opt to keep children physically out of school until more information and safer solutions are available.

“Furthermore, year-end school holidays will start in November. Why take a big risk in September and October? Therefore, the soonest time to reopen schools could be early next year,” he said.

On another note, Ahmad Ameen said even if it was found that youngsters are less likely to undergo severe symptoms by Delta infections or other variants, cases of infections are likely to increase when schools reopen.

Employers must bear costs of bringing in foreign workers – Hamzah