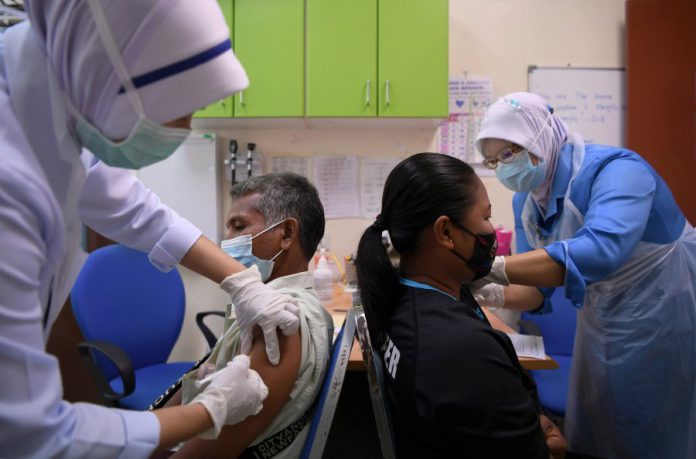 KUALA LUMPUR, Aug 17– Malaysia is getting closer to its goal of achieving herd immunity in tackling COVID-19 before the end of this year as this had been one of Tan Sri Muhyiddin Yassin’s key initiatives as soon as he was appointed prime minister on March 1 last year.

Now, it is up to the country’s new leadership to set the direction for Malaysia, especially in the fight against COVID-19, after the 74-year-old political figure who led the Perikatan Nasional (PN) government has decided to resign along with his Cabinet.

Muhyiddin’s 17-month rule as prime minister saw the announcement of nine aid and stimulus packages to help the people and the economic sector after the pandemic hit the country early last year.

Subsequently the RM15 billion Malaysian Economic and Rakyat’s Protection Assistance Package(PERMAI) was announced in January 2021 and the Strategic Programme to Empower the People and  Economy (PEMERKASA) involving a RM20 billion allocation in March 2021.

Then there was the PEMERKASA Plus worth RM40 billion announced on May 31 2021, followed by the People’s Protection and Economic Recovery Package (PEMULIH) worth RM150 billion on June 28, 2021 and finally the Perkukuh Pelaburan Rakyat (PERKUKUH) initiative to restructure the role and renew the capacity of government-linked investment companies (GLICs) in Malaysia.

In an effort to curb the spread of COVID-19 which required extraordinary measures, the Pagoh MP took drastic action by introducing the Movement Control Order (MCO) in March 2020, during which time three digit new cases were recorded.

The MCOs which were implemented in phases to include the Enhanced MCO, Conditional MCO, Recovery MCO were well received by the people that Muhyiddin’s line, ‘jangan ke sana, ke sini’ was used in parody songs to remind people to just stay at home.

The loan moratorium, Bantuan Prihatin Nasional (BPN), a one-off cash assistance were also extended to the M40 group and after seeing to the needs of the people and owing to his generosity and caring nature, Muhyiddin who is also Gambir state assemblyman, was nicknamed ‘Abah’.

The people’s insistence to allow them to withdraw their Employees Provident Fund (EPF) savings was also decided after careful consideration on the need to balance future retirement needs and the current need to facilitate temporary relief amid the pandemic.

As a result, three initiatives namely i-Lestari, i-Sinar and i-Citra, were announced by Muhyiddin to help  the people reduce their financial burden after the various phases of the MCO led to the shut down of certain sectors for a period of time.

To convince the people the need to get vaccinated to reduce the risk of COVID-19 infection, the father of four, was also among the first individuals in Malaysia to receive the vaccine shot on February 23.

In launching the National COVID-19 Immunisation Programme (PICK) on February 24 to curb the pandemic, Muhyiddin targeted 80 per cent of the country’s population or 26.5 million individuals to get the vaccine for free and so far RM5 billion has been allocated for the purpose.

So far, the programme has shown some early positive development after the number of category three to five COVID-19 cases in six states, namely the Federal Territory of Labuan, Sarawak, Negeri Sembilan, Selangor, Kuala Lumpur and Putrajaya, dropped by over 40 per cent.

The PN government’s efforts through the Ministry of Health (MOH) and the COVID-19 Immunisation Task Force (CITF) had enabled the rate of full vaccination in the Klang Valley to reach 64.7 per cent and this had brought a decline of hospital admissions.

As a transition strategy out of the health crisis, Muhyiddin introduced the National Recovery Plan (PPN) recently in late July, which has four phases of implementation.

Currently, seven states are in Phase One, namely Selangor, Kuala Lumpur, Putrajaya, Negeri Sembilan, Kedah, Johor and Melaka while Kelantan, Terengganu, Pahang, Perak, Penang and Sabah are in Phase Two and Perlis, Labuan and Sarawak are in Phase Three.

Muhyiddin, who took over the reins from the seventh prime minister Tun Dr Mahathir Mohamad, was also committed to continuing the Shared Prosperity Vision (WKB) 2030 introduced during the Pakatan Harapan (PH) administration.

Struggling with several political challenges, Muhyiddin said his appointment came not at the best time as he was faced with economic challenges brought by the pandemic.

Muhyiddin admitted his government was not perfect but stressed that the PN government had used the opportunities to emerge from the major health crisis and had moved forward and acted to save the lives and livelihood of the people.

With rising death rate, pregnant women urged to get vaccinated –...