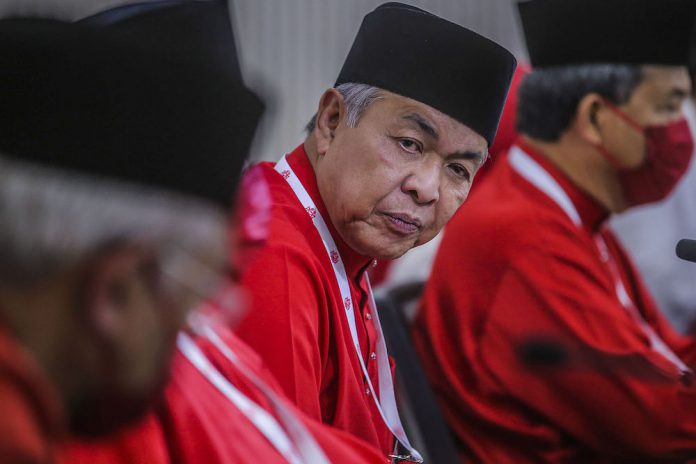 KUALA LUMPUR, Aug 16  — A stable government that will function for a reasonable period of time must be formed immediately to focus on efforts to contain the COVID-19 pandemic and issues concerning the people’s well-being.

UMNO President Datuk Seri Dr Ahmad Zahid Hamidi said towards this purpose, an effective Cabinet akin to the functions of a ‘War Cabinet’ must be established to enable the country’s recovery process to take place while facing the pandemic.

He said once Malaysia achieves herd immunity that could possibly allow the 15th General Election to be held, that particular government then must return the mandate to the rakyat.

“To ensure stability and political cooperation are achieved, oppressive acts against parties and the opposition leadership must be stopped. Using government agencies to weaken opponents in maintaining power will not give any benefit to the people,” he said in a statement tonight to propose ways for the ongoing political crisis from worsening.

He said what had happened must serve as a lesson and called on all parties to look ahead by fully focusing on one goal to jointly safeguard the well-being of the people and to rebuild the country.

Meanwhile, Ahmad Zahid said he felt hurt by accusations and slanderous statements thrown against him throughout the ongoing political crisis.

He said the people should know that despite heading the largest political (Malay-based) party, he never had thoughts of nominating himself as a candidate for Prime Minister.

“Therefore, UMNO, as a party with extensive experience in governing the country, will consider several candidates (for PM) and in this regard, I expect the cooperation and support of all Members of Parliament,” he said.