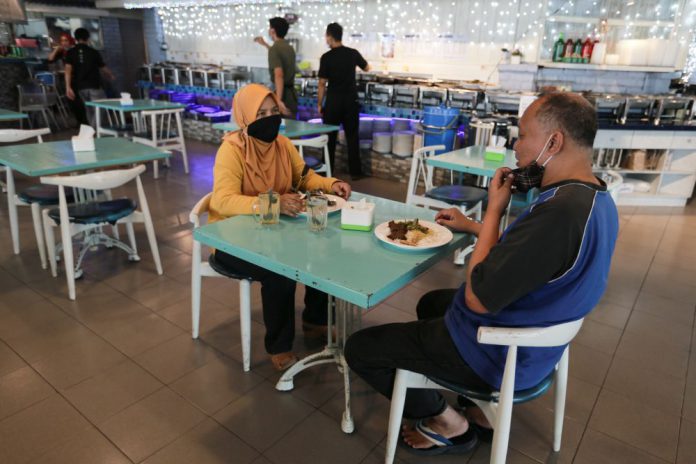 KUALA LUMPUR, Aug 21 ― The National Security Council (NSC) has released the latest standard operating procedures (SOP) for dine-ins, following the announcement on additional social and economic freedoms for states under Phase One of the National Recovery Programme (NRP).

In the latest SOP dated August 20, premises offering dining in services could only allow individuals who have been fully vaccinated including a mandatory notice posted on their premises’ entrance denoting the aforementioned condition for entry.

The NSC also said only workers who have received a complete vaccination and are not symptomatic are allowed to work, with overall vaccination status determining the capacity of workers allowed at one time.

Only premises whose workers are at least 80 per cent vaccinated are allowed to operate at full capacity.

It also said individuals who have completed their vaccination are allowed to bring their children aged 17 and below for dine-in purposes by adhering to general health protocols.

According to the NSC, complete vaccinations are defined as those who have passed 14 days from the day they received their second dose for vaccines requiring two shots (Pfizer, AstraZeneca and Sinovac).

As for vaccines requiring only one shot (Johnson & Johnson and CanSino), complete vaccinations is defined as those who have passed 28 days upon receiving their shots.

As for table arrangements, the NSC said each table must be physically distanced at least one metre from another and limited to a diner capacity of 50 per cent.

“Business premises owners must also ensure the arrangement of tables follows the necessary distancing and for their premises to have proper ventilation,” it said.

Another compulsory requirement business owners must adhere to was the inspection of digital vaccination certificates on the MySejahtera app before letting the patrons into their premises.

Under the latest SOP, the operation hours for premises offering dine-ins also remained unchanged from 6am to 10pm.

On August 19, then caretaker prime minister Tan Sri Muhyiddin Yassin had announced the easing of restrictions such as dining in restaurants that would apply only to those who have been fully vaccinated against Covid-19.