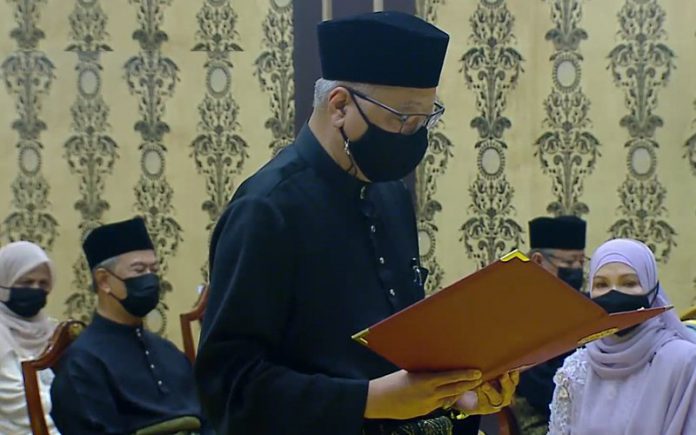 The ceremony, which involved the conferment of the instrument of appointment and taking the Oath of Office and Allegiance, as well as the Oath of Secrecy as the Prime Minister, was held at the Balai Singgahsana Kecil (Minor Throne Room), Istana Negara here, at about 2.20 pm.

Ismail Sabri was sworn in as the Prime Minister at 2.28 pm

Al-Sultan Abdullah consented to Ismail’s appointment as Prime Minister in accordance with Article 40(2)(a) and Article 43(2)(a) of the Federal Constitution.

The appointment of the Bera Member of Parliament (MP) was made following the resignation of Tan Sri Muhyiddin Yassin, who is Parti Pribumi Bersatu Malaysia (Bersatu) president and Pagoh MP, on Aug 16 after failing to command majority support of the parliamentary members after 15 UMNO MPs withdrew their support for  Perikatan Nasional (PN).

Ismail Sabri, 61, who was clad in black baju Melayu, complete with samping, was accompanied by his wife,  Datin Seri Muhaini Zainal Abidin.

After taking his oath of office, Ismail Sabri then signed the document.

The ceremony ended with the reading of the doa led by Datuk Dr Luqman Abdullah.

14 mln doses of Sinovac vaccine to be sold to interested...