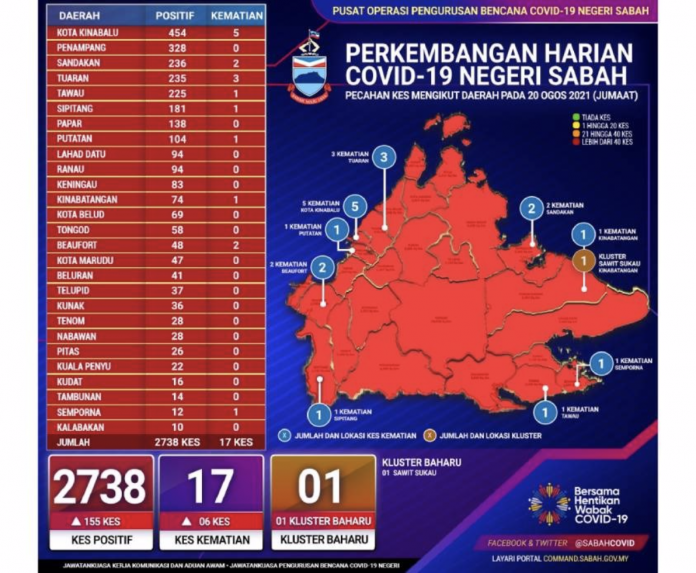 State Local Government and Housing Minister Datuk Masidi Manjun said of the total positive cases logged today, 1,012 cases were late cases which were registered two to three days after results of the screening cases were known, 223 cases registered four to five days late and 247 cases were registered after more than five days.

“Late registrations occurred because the data were collected and checked thoroughly which also involved figures that were quite high. The data were also collected from the various districts in Sabah,” he said in a statement tonight.

Masidi who is also Sabah COVID-19 spokesman said close contact remains the biggest contributor to daily cases registering at 1,616 or 59.02 per cent followed by symptomatic patients at 654 cases, cluster screenings (172) and the remainder of the cases detected from other screening processes.

Only one new cluster was recorded in Sabah today namely Sungai Pin 2 cluster in Kinabatangan which has been categorised as a workplace cluster with 30 cumulative cases.

“The case involves a 52-year-old Indonesian woman working in an oil palm plantation near Sungai Pin, Kinabatangan. She was confirmed COVID-19 positive via a workplace screening process on Aug 6 after she was found to be symptomatic,” he said.