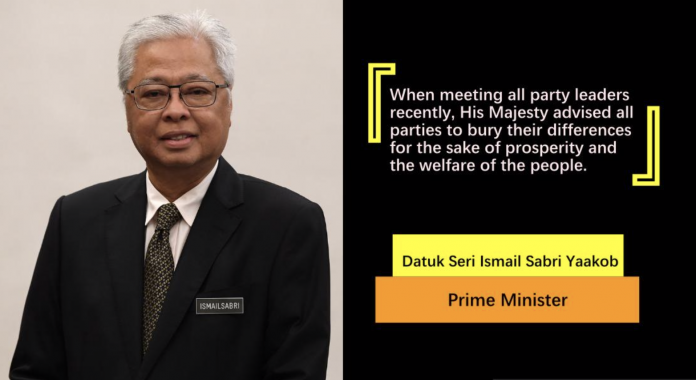 KUALA LUMPUR, Aug 22 — Datuk Seri Ismail Sabri Yaakob, in his maiden national address as the prime minister, invited the leadership of opposition parties to be part of the National Recovery Council (MPN) and the Special Committee on COVID-19.

Urging all parties to put an end to power struggles and the people’s restlessness, he said political stability must be attained as soon as possible through togetherness and cross-party cooperation.

“Looking back from the 14th General Election (GE14), and with only 21 months remaining until GE15, the nation experienced the transition of two governments and two prime ministers.

“Indeed, the transition within a single term is a political landscape that is detrimental to the people and the country,” he said today.

Ismail Sabri said all parties must be ready to work as a team for the sake of national harmony, to find  common ground and move towards building a consensus, as advised by the Yang di-Pertuan Agong Al-Sultan Abdullah Ri’ayatuddin Al-Mustafa Billah Shah.

“When meeting all party leaders recently, His Majesty advised all parties to bury their differences for the sake of prosperity and the welfare of the people,” he said.

Meanwhile, the Prime Minister said under his leadership, the new government will be driven by an administrative team that would help get the country out of the health and economic crisis, while also promising effective results to prove to the people that their trust will not go to waste.

He said this could only be achieved with the cooperation of all civil servants, whom he described as the backbone of the country’s administration.

“Let us work together as one big Malaysian Family to restore Malaysia back to the level of prosperity that we once knew. I solemnly pledge to work with the people,” he said.

lsmail Sabri, who is Bera MP, was sworn in as prime minister before Al-Sultan Abdullah at Istana Negara yesterday, succeeding Tan Sri Muhyiddin Yassin who resigned on Aug 16 after losing the majority support of the MPs.

Umno will back whatever Zahid decides, says analyst