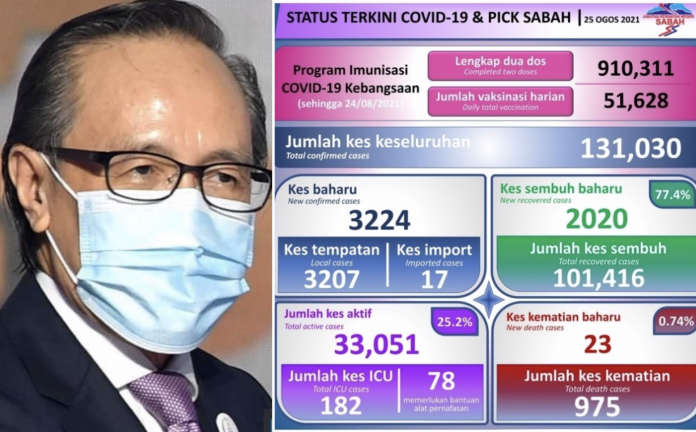 KOTA KINABALU, Aug 25 — Of the total number of 3,224 COVID-19 positive cases recorded in Sabah today, 866 of them comprised teenagers and children aged 17 and below.

State Housing and Local Government Minister, Datuk Masidi Manjun in a statement said from that number, 565 were aged between six and 17 years, 268 one to five years and 33 aged less than a year.

“All the 866 found to be positive for COVID-19 are still not eligible to receive the vaccine. Until yesterday, 53.9 per cent of Sabah’s adult population had received the first dose of vaccine while 32.5 per cent had completed their two-dose vaccination,” he added.

Masidi said from the number of positive cases recorded today, 2,119 were aged between 18 and 59, while 239 were senior citizens aged 60 and above.

Masidi, who is also the spokesman for the COVID-19 situation in Sabah, said all the districts in the state today recorded rising number of cases, with Kota Kinabalu having the highest number with 630, Penampang (413) and Tuaran (348).

“With the 2,098 cases recorded from the screening of close contacts, it can be concluded that many might not be adhering to the standard operating procedures set despite the numerous calls and appeals made by the government,” he added.

The number of cases recorded today has brought the cumulative figure in Sabah to 131,030, while 2,020 COVID-19 patients have recovered, bringing the cumulative number to 101,624 and 4,763 patients are still receiving treatment.

Two dead, one injured in factory floor collapse in Ijok