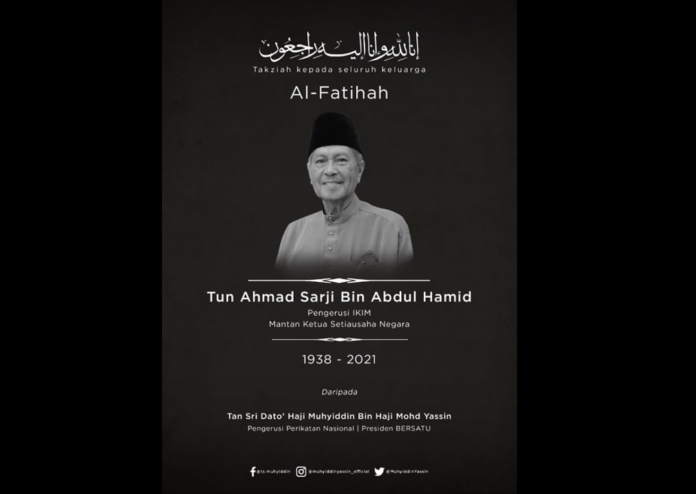 Muhyiddin said the late Ahmad Sarji was a highly respected public service administrator and one who was firm and very dedicated in carrying out every task entrusted to him.

“He was courageous and outspoken, firm in decision-making, trustworthy and highly disciplined.

“His modest demeanour which makes him approachable, had earned him the respect of many and he was highly regarded by the community,” Muhyiddin said in a post on his Facebook page, today.

Muhyiddin said when Ahmad Sarji held the KSN post,  he was known to have embraced the total quality management (TQM) concept to enhance the effectiveness of the public services delivery system.

Ahmad, 82, who joined the Civil Service as assistant district officer for Klang district in January 1961, served as Chief Secretary to the Government from 1990 to 1996.

UMNO president Datuk Seri Dr Ahmad Zahid Hamidi meanwhile said, the country had lost another much respected civil service figure who had also contributed a lot to the development of Islam.

“May all his deeds and services to Malaysia reward him in the Hereafter. My sympathies to his family and may they remain strong as they cope with the loss,” he said in a post shared on social media.