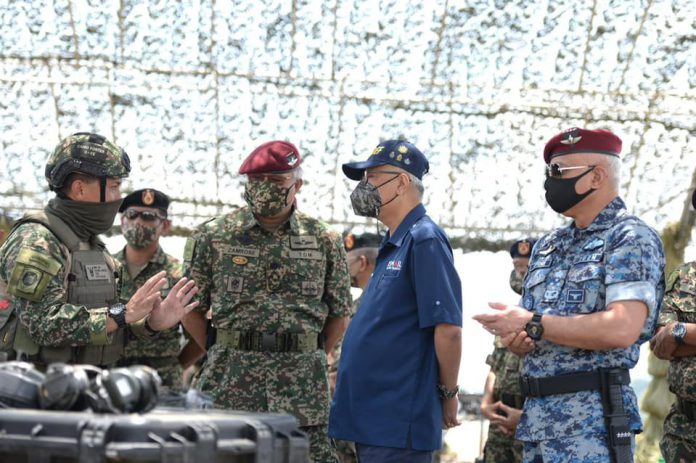 BERA, Aug 28 — All vaccination-related programmes and health strategies related to COVID-19 will from now on only be handled by the Ministry of Health (MOH) through its newly appointed minister Khairy Jamaluddin Abu Bakar, said Prime Minister Datuk Seri Ismail Sabri Yaakob.

“If prior to this, there were two related ministries (COVID-19) namely MOH and MOSTI, besides a committee chaired by two ministers, two secretaries-general and two directors-general… it is quite difficult if it remains as two because they may have different views and so on.

“(And) that is why MOSTI has to focus (on this) so that we don’t depend on foreign countries because when the number of cases increases and we still depend (on vaccine supply) from abroad, that will cause supplies to be affected. If we can produce our own vaccines, the situation will be different,” he said.

The two-week programme, which began on Tuesday and conducted by the Malaysian Army through its 10th Brigade Para elite unit based in Terendak, Melaka, involves large scale training for about 1,900 officers and personnel.

In a related matter, Ismail Sabri said he has informed the MOH, through director-general Tan Sri Dr Noor Hisham Abdullah that factories, especially those with many foreign workers, can set up vaccination centres (PPVs) to prevent congestion like what had happened at the Bukit Jalil National Stadium PPV.

He said the congestion drew concerns that those queuing for their vaccine shots could also get infected as images viralled on social media showed physical distancing guidelines were not being complied with.

“We also hope factories can purchase their own vaccines as this would be faster. We had also said that factories with 80 per cent of their workers fully vaccinated can resume operations. I believe the cost of vaccines is not as expensive as compared to the losses suffered if they continue to remain closed,” he said.

The Prime Minister said he had also informed Dr Noor Hisham to add more drive-thru PPVs as they are not costly to operate and also the fact that there is no close contact with others while queuing.

Asked if COVID-19 vaccinations should be made compulsory, Ismail Sabri said as the government’s priority is to ensure the people’s safety, this could be a possibility if many continue to reject the vaccine as they could go on to infect others.

On not naming a deputy prime minister (DPM) in his Cabinet line-up, Ismail Sabri said his predecessor Tan Sri Muhyiddin Yassin also opted not to have a deputy when he was first appointed but added that this situation could always change.

“When Tan Sri Muhyiddin Yassin first announced his Cabinet, there was also no deputy.. so it is the same…InsyaAllah, there was none (DPM) initially, and then there was one,” he said.

Before embarking on his working programme today, Ismail Sabri also took time to visit the graves of his parents in Kampung Lubuk Kawah, Temerloh.

No discussions on group supporting Ismail Sabri in UMNO election –...