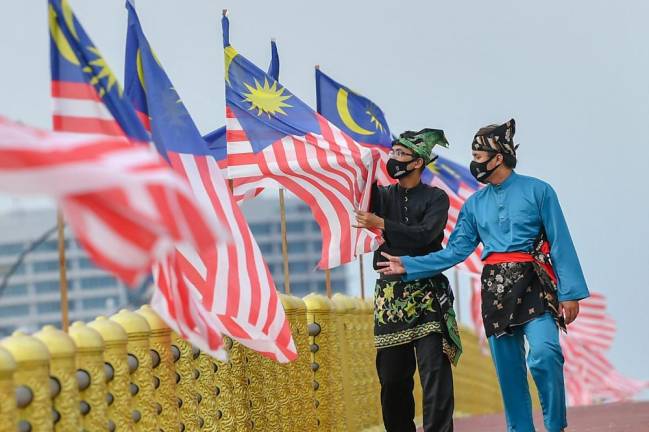 PUTRAJAYA, Aug 29  — As one is driving amidst rows of fluttering Jalur Gemilang along the Seri Gemilang Bridge in Putrajaya, two men dressed in Baju Melayu complete with samping (a sarong) and tanjak (traditional headgear) just like ‘pendekar’ (great warriors) of old, will definitely catch one’s eye.

Some greeted them with ‘you’re the best bro’, others gave a ‘thumbs up’ sign while some honked at the two – Mohd Khairul Kamaruzaman, who is a silat (martial arts) teacher from Pertubuhan Seni Gayung Fatani Malaysia, and his student, Izwan Khuzzairie Azhar Ahmad.

For Mohd Khairul, 36, and Izwan Khuzzairie, 23, dressing in traditional attire, similar to the costume worn by great Malay warriors in the past, is their way to express their love for the country, in conjunction with the 64th National Day celebration on Aug 31.

Mohd Khairul said when wearing the attire in public, somehow it stirred the patriotic spirit in him apart from it being his intention to remind the public about how the Malay warriors were attired when fighting against colonial rule.

“We need to show the identity of our warriors in the past; nowadays, many do not really understand. By right, we should all get rid of our shame and embarrassment; what is wrong with, in conjunction with the National Day, we all dress in our traditional attire?” he told Bernama.

“As I see it, as I am dressed like this, many actually said “hi” and the majority of people supported what my student and I are doing… some did honk and others greeted,” said Mohd Khairul.

Mohd Khairul, a father of three from Kelantan, said that Malaysians should always remember the sacrifices of previous fighters, because without them, the peace enjoyed now would not be possible.

“Even though the country was hit by the COVID-19 pandemic, we can still celebrate the National Day in various ways, and what is important is to comply with the standard operating procedures (SOPs), including wearing a face mask,” he said.

Meanwhile, Izwan Khuzzairie said young people should use social media, such as Facebook, Instagram and TikTok, to enliven the 64th National Day celebrations.

“Upload a picture with the Jalur Gemilang and put a certain hashtag that lets outsiders know that we are celebrating the country’s national month. We should be proud that the country has become independent, and lives in peace and harmony between different races,” said the third-year student of Universiti Teknikal Malaysia.

He said although the festivities of the national month celebration this year were subdued by the COVID-19 pandemic, it should not be used as an obstacle for Malaysians to fly the Jalur Gemilang together as a sign of love for our country.

Vaccinating as many people as possible the only way out from...