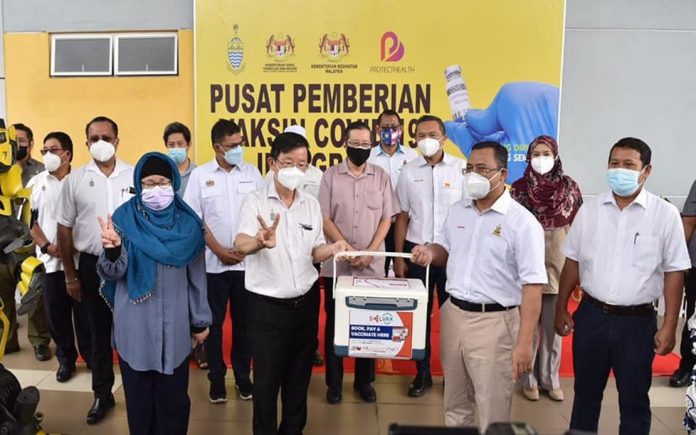 BUKIT MERTAJAM, Aug 31 — The Selangor government today contributed 20,000 doses of the COVID-19 vaccine to Penang in an effort to vaccinate the rest of the population on the island state.

Penang Chief Minister Chow Kon Yeow thanked Selangor for helping it to speed up the vaccination rate in an effort to break the chain of infection.

“In the spirit of the National Day, the Selangor government has graciously donated 20,000 doses of vaccine to the Penang government for free and this is also a sign of solidarity between the people of Selangor and the state in the fight against COVID-19.

“I hope this effort can help speed up efforts to achieve herd immunity. As of yesterday, a total of 1.14 million Penang residents have received the first dose of the vaccine, which is 64.6 per cent of the adult population, while 55.7 per cent have been fully vaccinated,” he said today.

Amirudin said the vaccine contribution to Penang was not made on a one-off basis, but would depend on the needs and current situation of vaccine supply in the state.

“However, if the situation in Penang stabilises, it may be a one-off contribution. I was also told by the Chief Minister (Chow) that the Ministry of Health (MOH) has contacted him and promised a steady supply of vaccines,” he said.

Earlier, the Penang government announced that Selangor had agreed to lend it 200,000 doses of COVID-19 vaccine, with Penang Health, Agriculture, Agro-based Industry and Rural Development Committee chairman Dr Norlela Ariffin reportedly saying that, so far, 225,226 Penangites had not received the first dose of the vaccine, with the majority being those in the Seberang Perai Tengah district.