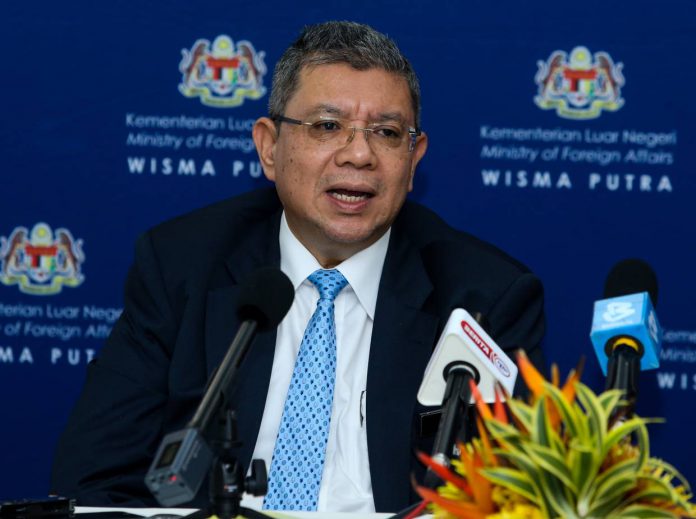 PUTRAJAYA, Sept 1 — Foreign Minister Datuk Saifuddin Abdullah on his first day in office said his immediate task is to establish the foreign policy framework for the new administration that will provide guidance on Malaysia’s direction, focus and approaches on foreign policy.

Saifuddin, who returned to the foreign affairs portfolio for his second stint, said the foreign policy framework for the new administration is in line with the prime minister’s directive for a productive first 100 days in office.

“It is not a new foreign policy. The central theme is “focus in continuity”,”  he told reporters after his first meeting with the ministry’s heads of department on Wednesday.

Elaborating on the theme, he said ‘focus’ will deal with short-term priorities and challenges, primarily on ‘health diplomacy’ to manage the COVID-19 pandemic and its impacts.

“Continuity means the country will look at the medium to long term in which Malaysia will continue to practice its long-held fundamental principles in its international relations.

“For example, maintaining good relations with all parties; upholding Malaysia’s interests in terms of sovereignty, survival, and security; its economic interests and the people’s prosperity; and protecting as well as promoting the nation’s identity and reputation among the international community,” he said.

“We will also promote ‘cultural diplomacy’ to boost our national identity. As for world peace, we will articulate the concept of ‘peaceful coexistence’ in the context of multilateralism,” Saifuddin added.

On his first day at the ministry, Saifuddin also announced that he will establish a Foreign Policy Consultative Council that will include the ministry’s officials, academicians, businessmen and civil society representatives.

The committee will be made up of at least 15 members, with the first meeting to be held this Friday.

Apart from this, he will also propose to the Cabinet the establishment of a Parliamentary Select Committee on International Affairs.

“We at (the) Foreign Ministry will adopt an open and consultative (Syura) approach with all stakeholders, be it at home or overseas,” he said.

Earlier, Saifuddin arrived at Wisma Putra here at 2 pm after attending the first Cabinet meeting chaired by  Datuk Seri Ismail Sabri Yaakob, who was sworn in as Malaysia’s 9th Prime Minister on Saturday.

On arrival, he was greeted by his deputy Datuk Kamarudin Jaffar, who retained the post from the previous government, and the ministry’s Secretary-General Datuk Seri Muhammad Shahrul Ikram Yaakob.

Saifuddin was foreign minister from 2018 to 2020 under the Pakatan Harapan (PH) government.

ECRL Terowong Dungun breaks through six months ahead of schedule