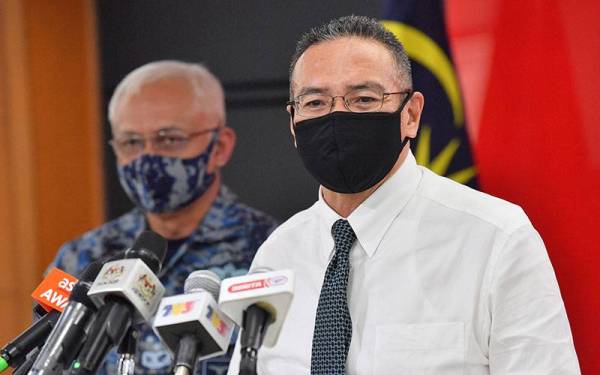 Hishammuddin said the matter was decided at the MKN Special Session today.

“Among the main instructions given by the Prime Minister (Datuk Seri Ismail Sabri Yaakob) to me just now is to evaluate and streamline the standard operating procedures (SOP) that have been announced previously, from time to time.

“I believe that this is a continuous effort that requires an inclusive approach, and I am always open to opinions from all parties, including the people to provide their views and feedback for our mutual benefit,” he said in a special press conference at the Ministry of Defence here today.

Hishammuddin who assumed the role of Senior Foreign Minister had also been entrusted to lead the efforts during the previous administration.

According to him in an effort to move towards the endemic phase by the end of October, it was vital to implement a comprehensive approach to determine SOP that could protect the lives and health of the people while strengthening the country’s economy and for the people’s wellbeing.

Hishammuddin also welcomed the public to provide their feedback as well as constructive ideas and criticism on COVID-19 SOP to MKN or directly to him.

“So i’m giving you all the opportunity to do that because I must admit we do not have a monopoly to say what we are doing is right…I hope that our plans can continue to be improved,” he said.

Hishammuddin also hoped that the SOP that would be announced by the government would be more comprehensive, for a long-term period, easy to understand and most importantly it is able to effectively address health issues, revive the economy and safeguard the people’s wellbeing.

“The current situation is different from last year… this year we have implemented a large-scale vaccination drive under the the National COVID-19 Immunisation Programme (PICK) which has also shown encouraging development,” he said.

Hishammuddin also said that the SOP that would be announced would be based on best practices which were also widely used around the world.