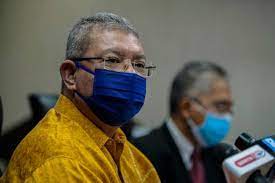 The minister said SEARCCT, under the purview of the Ministry of Foreign Affairs Malaysia,  have been told to work closely and strengthen cooperation with organisations sharing similar functions as SEARCCT in the ASEAN region.

“I have also asked SEARCCT to strengthen work in three areas namely research, publication and training,” he told a press conference after a working visit to SEARCCT here, today.

Saifuddin said he has asked SEARCCT to adopt the ‘peaceful co-existence’ approach as a new way in dealing with religious radicalism.

He said that it is also important for SEARCCT to give importance on the element of cyber security to monitor the influence of terrorism happening online.

Hard lessons in store for those who take out EPF savings,...