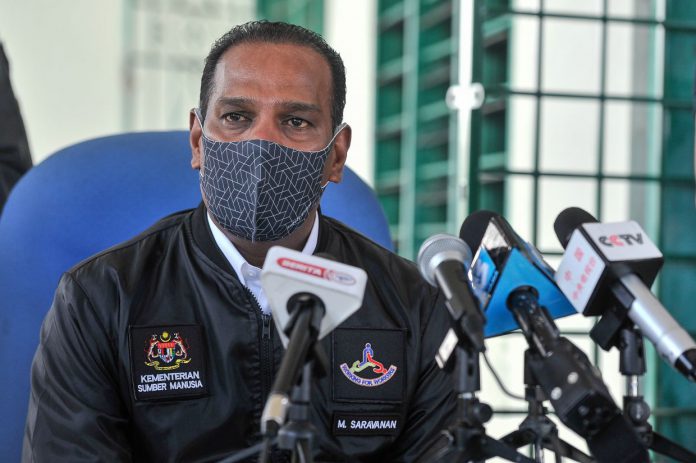 KUALA LUMPUR, Sept 7  — A total of 40,680 cases of loss of employment (LOE) have been recorded in the country as of August this year, with an average of 5,811 cases per month, said Human Resources Minister Datuk Seri M. Saravanan.

He said the Social Security Organisation (Socso)’s Employment Insurance System is monitoring the LOE trend on a daily basis, in order to provide protection to workers who have lost their jobs for various reasons.

According to Socso, LOE definition includes normal retrenchment and redundancy, voluntary or mutual separation schemes (VSS/MSS), closure of the company due to natural disasters, bankruptcy etc., constructive dismissal, resignation due to sexual harassment or threats made in the workplace, and resignation after being ordered to perform dangerous duties that are not within the job scope.

“As we are all aware, the COVID-19 pandemic has not only affected people’s health but also created an economic crisis for nations around the world.

“This follows measures taken to prevent the virus transmission, which resulted in closures of companies with workers losing jobs or working for a reduced salary,” he said in the opening address of the International Public Employment Forum (IPEF 2021), held virtually today.

Saravanan said the government, since March 2020, has taken various measures to alleviate the burden of the people and ensure businesses can continue to operate, to avoid huge retrenchment exercises, including the National People’s Well-Being and Economic Recovery Package (PEMULIH), which was launched in June this year.

Socso, an agency under his ministry, is tasked with implementing PEMULIH programmes, such as the Wage Subsidy Programme 4.0, PenjanaKerjaya 3.0, KerjayaGig and SIP Prihatin 2.0, which are targeted at employers, employees, job seekers and the self-employed.

Meanwhile, the national job portal, MyFutureJobs has so far recorded a total of 1.29 million vacancies from 21 sectors, and a total of 564,830 active job seekers have registered on the portal, with 196,471 successful placements recorded.

Speaking on IPEF 2021, Saravanan said the event organised by Socso, needs to be leveraged to strengthen and create a more resilient labour market in the country as it is one of the important components of the nation’s economy.

“There is also a need to strengthen the current labour market, and continuously upgrade evidence-based policies for better social security protection based on rapid response scenarios, whether it is related to health, employment, or social protection response,” he said.

The two-day IPEF 2021, beginning today, features more than 50 local and international speakers and presenters, with three concurrent events – two virtual symposiums and a mega job fair – to help rebuild the economy and the labour market post-COVID-19.