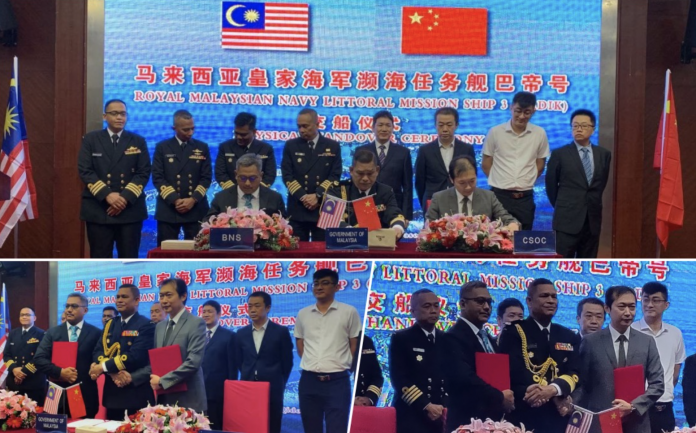 BHIC said the LMS is a new class of RMN warships that will bolster Malaysia’s maritime defence as part of the Navy’s 15 to 5 Transformation Plan to upgrade its fleet and create an efficient, fit-for-purpose armada.

The physical hand over (PHO) ceremony of LMS3, the third out of four units of the Keris-class LMS jointly built in China by BNS and the China Shipbuilding and Offshore Corp (CSOC), was held at the Wuchang Shipyard in Qidong, Nantong in Jiangsu Province, China, today.

“The PHO follows the acceptance of all final certificates by RMN and the completion of the ship’s hull structure, living space and equipment plus combat system tests and trials, in compliance with the contract specifications,” said BHIC in a statement today.

RMN’s Final Acceptance Committee head of delegation First Admiral Zahid Abd Aziz, who is also the Defense Attache at the Malaysian Embassy in Beijing, accepted the PHO on behalf of the Malaysian government at the acceptance ceremony.

When commissioned, the LMS3 will join RMN’s 11th Squadron together with LMS1 KD KERIS, which was commissioned in January 2020, and LMS2 KD SUNDANG, commissioned in March 2021, which operate under RMN’s Eastern Fleet Command Headquarters based in Sabah.

The procurement contract to jointly build the LMS was signed on March 23, 2017 between BNS and the Malaysian government, with CSOC acting as a partner shipyard of BNS.

BHIC chief executive officer Sharifuddin Md Zaini Al-Manaf said the company is proud of its contribution to the nation’s maritime defence and is hoping of securing contracts for the subsequent batches of LMS.

Boustead Holdings Bhd group managing director Datuk Seri Mohammed Shazalli Ramly said the successful PHO of the LMS3 augurs well with efforts by BHIC to become a high-performing organisation, in line with the Reinventing Boustead strategy to put the group on a more solid footing towards attaining sustainable growth.

Plantation firms post fruitful financials, index up more than 20 per...