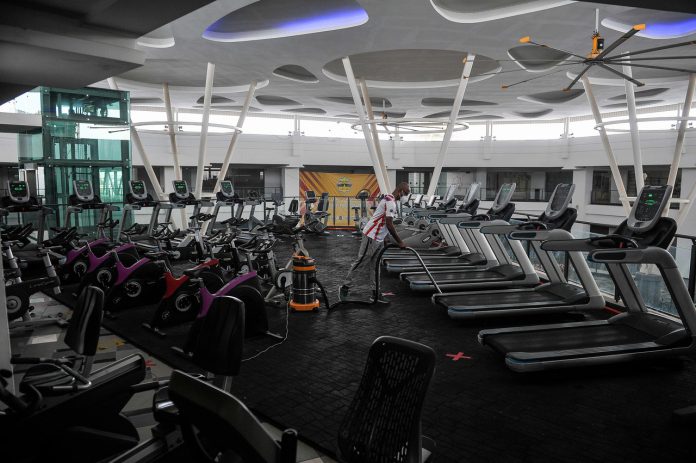 KUALA LUMPUR, Sept 18 — The Youth and Sports Ministry (KBS) has urged all gymnasium facility operators and users to comply with the stipulated standard operating procedures (SOP) following the resumption of the sector.

Its minister, Datuk Seri Ahmad Faizal Azumu said this would ensure that the approval would not be withdrawn due to SOP violations that could lead to the spread of COVID-19.

“Everyone received the good news yesterday when the National Security Council (MKN) approved the reopening of indoor sports, including bowling and gymnasiums, subject to the stipulated SOP,” he told reporters after visiting the Bukit Kiara extreme sports complex here today.

He also conveyed his gratitude to his colleagues in his ministry, the MKN and the Health Ministry (MOH) on their efforts to approve the reopening.

According to the MKN updated SOP, all gymnasiums, except for those in states under Phase One of the National Recovery Plan (PPN) have been allowed to resume operations but only for those who have completed their COVID-19 vaccination and at 50 per cent capacity.

Meanwhile, Ahmad Faizal announced that the Bukit Kiara extreme sports complex, also known as the Kiara Skatepark, which has been closed since 2019 for renovation, would also be open to the public and skateboarders as the restoration work was in the final stage.

“When it reopens, our skateboarders can return. I hope the skateboarders will take this sport seriously as the world has included it as a medal sport at the 2024 Paris Olympics…if possible we would want someone representing the country competing there.

“We will also open it to the public in hopes of unearthing more new talent. I want to convey my ministry’s thanks to two companies, Vans and U Mobile, for helping us restore Kiara Skatepark,” he said.

The renovation of Kiara Skatepark, which was originally built in 2006, included repairing existing ramps, the construction of new ramps with the latest designs and is expected to be completed in October this year and will be open to extreme sports enthusiasts, including skateboarders and BMX riders.