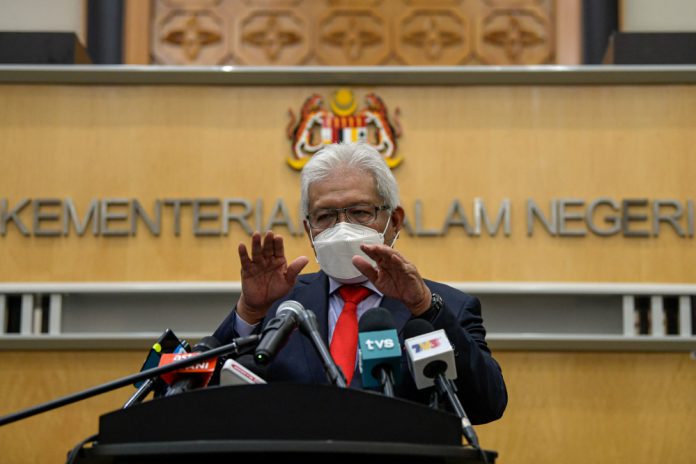 PUTRAJAYA, Sept 24 — The Cabinet has agreed to continue with the appeal and stay of execution application on the Kuala Lumpur High Court’s decision on the granting of automatic citizenship to children born abroad to Malaysian women married to foreign spouses.

Home Minister Datuk Seri Hamzah Zainudin said this was to enable the Government not to be subject to contempt of court, and at the same time, comply with the provisions of the Federal Constitution.

He said there were two different Kuala Lumpur High Court decisions, namely the case of Suriani Kempe and six others against the Malaysian Government and the case of Mahisha Sulaiha Abdul Majeed against the Director-General of National Registration along with two others over the interpretation of the term ‘father’ in the Second Schedule Part II Section 1 (b) and 1 (c) of the Federal Constitution.

“In the Cabinet meeting earlier, we invited the Attorney-General Tan Sri Idrus Harun to provide an explanation. The Cabinet has asked the Attorney-General to also bring the issue to the Deputy Yang di-Pertuan Agong, Sultan of Perak Sultan Nazrin Muizzuddin Shah, in the near future,” he said during the Home Ministry’s special press conference here today.

He said the decision was made after taking into account the different judgments in the two cases, and the court proceedings in the Mahisha Sulaiha case, which is still ongoing at the Court of Appeal, and set to be heard in November.

On Sept 9, the Kuala Lumpur High Court ruled that babies born overseas to Malaysian women who are married to foreigners are automatically entitled to Malaysian citizenship.

Lawyer Datuk Dr Gurdial Singh Nijar was reported to have said that Judge Datuk Akhtar Tahir ruled that the word ‘father’ in the Second Schedule of the Federal Constitution should mean and include the mother.

It was reported that the judge made the decision after examining several Articles in the Federal Constitution, and also ordered all relevant authorities to issue documents such as the identity cards to the babies.

The High Court made the decision during online proceedings after allowing the suit initiated by the Association of Family Support & Welfare Selangor & KL (Family Frontiers) as well as six Malaysian women married to foreigners to enable their babies born overseas to automatically obtain citizenship.

WHO praises Malaysia’s preparedness, ability to deal with COVID-19 – Dzulkefly